One of the foremost priorities should be the amendments in judicial appointments. This is what came out of the first Cabinet meeting under the leadership of the Prime Minister Robert Abela.

During this first meeting, the Cabinet agreed with the Prime Minister’s proposal of setting up a committee which addresses Governance. Its aim would be that of taking into consideration the measures which have already been implemented as well as those which still need to need to be in place. This account should be based on the reports from the Venice Committee and the GRECO, and also and in the context of discussions that took place in the committee led by the President George Abela about consitutional changes.

After the meeting, the Prime Minister underscored the importance of sound governance in all the areas of government leadership and public administration. He further stated that it is the duty of each Minister and Parliamentary Secretary to make sure that the work done in their respective responsibilities is done diligently and with a sense of accountability, as stipulated by the law.

During this meeting, the Prime Minister once again welcomed the students of the Qormi Primary School in Castille Palace. 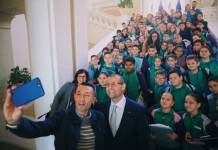 Let music wrap up the end of February

Coryse Borg   February 18, 2020
The Malta Philharmonic Orchestra and Heritage Malta have teamed up to conclude the month of February with elegance, style and romance by attending to a delightful performance by Omnia Quartet within the unique historical context of the Inquisitor’s Palace in Birgu on the 29th February at 7.30 pm.

Tests on arrivals from countries hit by Coronavirus