According to PN Leader Bernard Grech, confidence in Malta by foreign investors has reached an all-time low since 2004. Grech called for a future-oriented plan that will give hope for a better tomorrow.

In a statement, Grech remarked that this reality cannot be overcome with nice and empty words, nor with bombastic statements or stickers and signs around Valletta. “The number of people saying that Malta is not a good destination for investment has grown, and the factors that made our country most attractive five years ago, transparency and a strong political and legal framework, are now in the bottom of the list.”

The statement read that this situation was brought about by Robert Abela’s predecessor, Joseph Muscat, who won the award for the most corrupt politician in the world in 2019. Grech mentioned that this is the result of years of leadership that has allowed for impunity, laxity, lack of good governance. During these years, Robert Abela attended the cabinet and was a consultant of the same cabinet, the PN leader noted.

Grech called for a plan that will give hope for a better tomorrow. 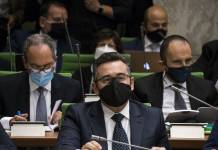