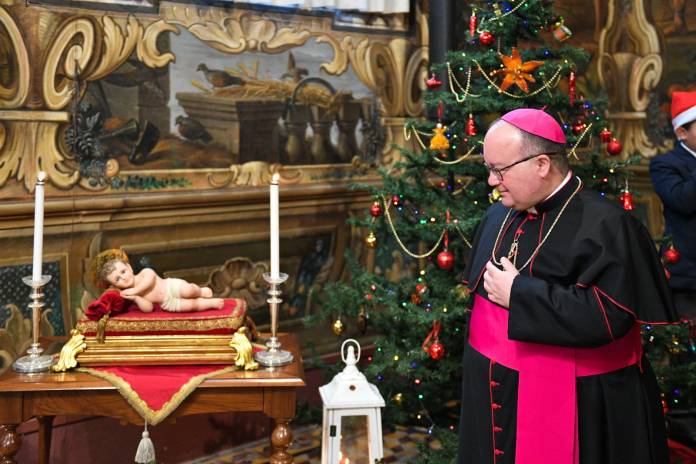 The religious celebrations led by Archbishop Charles Jude Scicluna during the Christmas season – which will start on Christmas Eve and conclude on 3 January – will be open to the public in full respect of the Covid-19 measures and restrictions, but vulnerable persons can choose to follow these celebrations on Newsbook.com.mt.

These celebrations will also be available on national TV channels and on Church.mt.

On Christmas Eve, the Archbishop will be presiding over the first vespers of Christmas at 5.15pm at the St John’s Co-Cathedral in Valletta, before celebrating the Vigil Mass at 5.45pm.

Later in the evening, at 11.15pm at the St Paul’s Cathedral in Mdina, the Archbishop will lead the Office of Readings during which Christmas carols will be sung. At midnight, he will walk in procession with a statue of the baby Jesus to celebrate the solemn Midnight Mass of the Nativity of our Lord. The celebration will also be broadcast on TVM. Due to space restrictions, anyone wishing to attend in person is invited to call on 2145 6620 or 2145 4136 or to send an email at parrocca.mdina@maltadiocese.org.

On Christmas Day, at 9.30am, the Archbishop will be celebrating the Christmas Day pontifical mass at the Mdina Cathedral. The celebration will also be broadcast on TVM2.

On New Year’s Eve, at 5.30pm, the Archbishop will be celebrating the annual thanksgiving mass, with the Te Deum set to be sung at the end of it. This mass will be held at the St John’s Co-Cathedral in Valletta, and will also be broadcast on TVM2.

On New Year’s Day, at 9.30am, Archbishop Scicluna will be at the Dar tal-Providenza in Siġġiewi to preside over mass on the Solemnity of the Holy Mother of God and on the World Day of Peace, in another event set to be broadcast on TVM2.

The Christmas festivities will be brought to a close on Sunday 3rd January, with the Archbishop celebrating mass on the occasion of the Epiphany of the Lord at the St John’s Co-Cathedral at 9.30am. During mass, which will also be broadcast on TVM2, the Archbishop will confer the Ministry of Acolytes on two seminarians and the Ministry of Lector on three others.