Schembri thanked the airline for delivering 5.6 tonnes of the vaccine.

The Minister appealed for the public to be vaccinated so that the Government’s efforts translate into more wealth for the people.

The seasonal influenza vaccine is to be administered for free from a number of health centres in Malta and Gozo. It will be available as of 11th October onwards. Health Minister Chris Fearne urged people to take the vaccine in order to stave off further illness during a pandemic.

More details on the vaccine:
Watch: Influenza vaccine to be administered for free 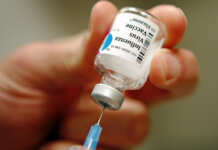