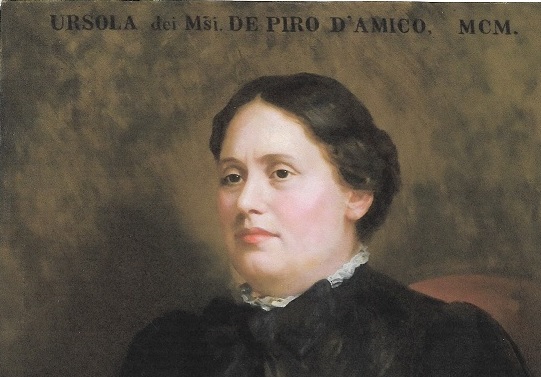 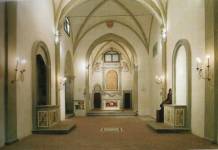 Now back to Orsola Agius Caruana (1847-1937), only child of Santo Caruana and Veronica Gauci. She had three paternal uncles: Tommaso, Lorenzo and GioFrancsco. They were from Cospicua, came from a very wealthy background, all were older than Santo and all became priests.  Orsola’s mother was a descendant of the noble Gauci and Azopardi families which had links with Żejtun, where Orsola was born and where her parents had been married in 1841. One of Orsola’s paternal uncles was to become Monsignor and moved to Florence. It is also worth noting that her four paternal aunts left no heirs, thus she eventually became sole heiress to all her uncles and aunts. The Monsignor in Italy was interested in the church of San Jacopo and together with a fellow Italian prelate bought the church and adjacent property. The two made a will stating that whoever survived of the two would be the other’s heir. As the Italian prelate died first the lease was inherited by the Maltese Reverendo.

Of Monsignors and Wedding Bells

In November 1868 Orsola married the Noble Alessandro de Piro (1849-99), younger brother of Giuseppe de Piro-Gourgion (1845-1916) 6th Baron of Budach who died unmarried.  The couple were frequent visitors to Florence and their first child, Maria Teresa was born in the house attached to the church. It was Alessandro and Orsola’s eldest son Igino (1874-1942) who succeeded his uncle as 7th Baron. Among many other children born to Orsola and Alessandro there was the well-known, saintly Monsignor Giuseppe de Piro (1877-1933). The latter founded the only Maltese autochthonous religious order, the Missionary Society of St. Paul, (MSSP).  The church of San Jacopo was restored, well-maintained and re-consecrated.  An important family event was in 1925 when Baron Igino’s daughter Cecilia (Cissie) got married in the church.

Inheritance down the line

Direct contact between Italy and Malta stopped during the 2nd World War and resumed shortly after.  At the time of his death in 1942, Baron Igino owned one-sixth of the church and property attached to it. Ownership of the church was never divided but the property was and the Baron obtained the house while the large chunk of remaining property, mainly in via Nazionale, which is just round the corner, went to his brothers, sisters and their heirs.  Baron Igino was succeeded by his son Jerome (1914-96) 8th Baron and later also 8th Marquis de Piro.  His only son is Nicholas, 9th Marquis and 9th Baron, who as a schoolboy remembers visiting the church in the early 1950s.  My friend vividly remembers a lot about the good state of the church and has photographs to prove it. At this point a description of the interior is appropriate.  I shall merge my friend’s reminiscences with mine.

Despite many modifications, the church has maintained its original 13th-century layout. Many memorial plaques with inscriptions are fixed to the walls. There are some marble gravestones: one in low relief is of the Knight Luigi Tornabuoni, member of the same Florentine family to which belonged Lucrezia, Lorenzo il Magnifico’s mother.  Grand Master D’Aubusson, (r. 1476-1503) described Tornabuoni as “the Lion of Florence” most likely because of his part in the successful defence of Rhodes when besieged by the Ottoman Turks in 1480. The gravestone was laid in 1515 and is the work of a sculptor from Fiesole known as “Il Cecilia”. There is a “Beheading of St. John the Baptist” by Paladini and the present Marquis de Piro remembers seeing a very beautiful painting which was very strongly attributed to Ghirlandaio, while other experts pointed at the Maestro del tondo Borghese. The subject is “The Mystical Marriage of St. Catherine” [of Alexandria] with a kneeling St. Margaret and down on the right corner, the donor in prayer. Details one notices in the apse include the painted crucifix with frescos of adoring angels high on either side and at the top the date MDCXVI [1616]. High on the right-hand wall to the right of the altar is a lunette fresco of “St. George and the Dragon”. On the opposite wall, a similar work depicting “Madonna and Child”. On either side of the wall above the main door (controfacciata) there are two wooden busts of   “St. Mary Magdalene”  (left) and “St. James the Great” (right).

During my visit I was accompanied by the Director of the Istituto who pointed out what he described as the three greatest treasures in the church: the Tornabuoni gravestone, the Paladini and a mid-15th century weirdly shaped crucifix. The “Mystical Marriage of St. Catherine” was nowhere to be seen. Marquis de Piro says that the church suffered damage during the devastating floods of November 1966. Something else he remembers in the church was that the main altar housed the remains of Blessed Pietro Pattarini known as Beato Fra Pietro da Imola (c.1250-1320). He was a Knight of St. John and Grand Prior of Rome who died while on a visit to Florence and was buried at San Jacopo.

Relics hung up to dry

Mattia Preti includes Bl. Pietro in his series of paintings of saints and heroes of the Order of St. John below either side of the lateral windows in our St. John’s in Valletta. Bl. Pietro’s remains had once suffered great damage and displacement during floods in 1557. During those of November 1966 they were disturbed yet again. While Nicholas was on another visit sometime after the latter floods, the custodian informed my friend that in the general chaos he had to salvage the remains and hanged them from a tree to dry in his own garden in Fiesole!  Some neighbours must have been rather alarmed at the macabre sight. In due course the remains were put back in the church and donated to the Knights of Malta. The peregrinations of the relics were not over, as some years later in June 2016, they were moved to the Florentine basilica of San Lorenzo. That was just 3 months before my visit.

The adjacent Istituto Lorenzo de’ Medici took over the church which was deconsecrated. The Istituto launched a very ambitious and extensive restoration of the church, thanks to which the church is in a very good state of preservation. The “Mystic Marriage of St. Catherine” was restored and has been relocated elsewhere. The re-opening of the newly restored church took place on 3 May 2006. It was timed to coincide with the 800th anniversary of the church’s foundation.

ACKNOWLEDGEMENTS: Nicholas, Marquis de Piro for his invaluable help with certain details, including the black and white photographs.

WIKIPEDIA: (Photograph of The Mystical Marriage of St. Catherine).