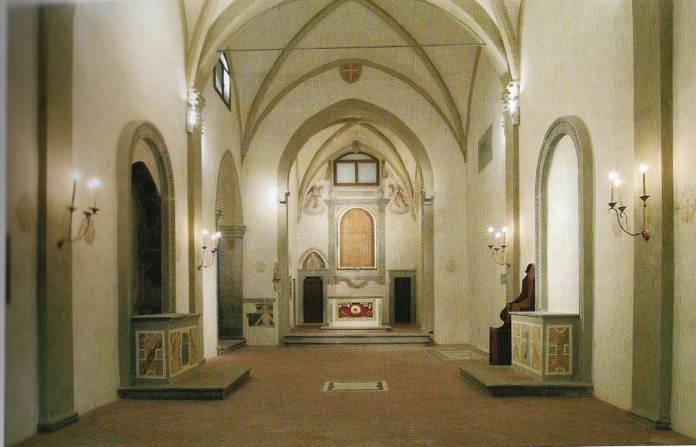 The best way to see and explore a place is by wearing a comfortable pair of shoes or sandals and walk. I am always doing that wherever I go and exploring Florence in that manner is no exception.

In the last 37 years of the 20th century, I only visited twice: 1965 for a week and a day visit from Siena in 1989. That was decidedly a miserable tally for such a city, yes I DO know but I was very busy visiting other places in Europe and beyond. I turned a new leaf with the change of millennium in 2001 (NOT 2000) and in the past 20 years or so I have been almost as many times.

It was quite some time ago, maybe some 10 years ago, that when walking down via Faenza one end of which leads into Florence’s via Nazionale, almost corner with that street I saw this little church portico closed off by railings and a closed gate. At the corner was an 8-pointed cross in relief on a shield supported by a lion under an open coronet. Right next door is the Lorenzo de’ Medici Italian International Institute, more about which below.

The reason why this place roused my curiosity more than usual was that in the portico there was an inscription on a plaque fixed to the wall mentioning “La Nobildonna  Orsola Agius Caruana” describing her as a benefactress of the church.  I also noticed a closed window and protective grille above which there is the de Piro coat-of-arms. Church and Institute were closed and I noticed that the shield of “the Religion” of the Order of St. John’s with a white cross on a red field, was painted above the door of the Institute. So there was a connection with Malta and I knew that the lady mentioned in the above plaque was an ancestress of my friend Nicholas, Marquis de Piro.

For some reason, I left it at that but every now and then it haunted me and I was curious more than ever to find out about it, and possibly visit that church. After that first sighting, I passed by this place many a time. Every time I did I felt guilty for not having fulfilled what deep down I wanted to do. When in mid-September 2016 I was back in Florence, this time with a friend and her dog on an overland trip from the UK to Malta, we changed accommodation 3 times in a week. The second time was right opposite this church of San Jacopo in Campo Corbolini, so-called because of the ancient Corbolini family who had property in the area. Another name for the church was San Jacopo dei Cancelli because of the church’s railed portico.

One fine morning I went to the Istituto Internazionale Lorenzo de’ Medici. I went to the reception desk at the end of the entrance hall where I could see, to the left, a closed-door leading to the church. I said to the receptionist, a young South American lady, that I was from Malta. I presented my credentials, adding that I was active in cultural journalism and broadcasting, adding that I would appreciate kind permission to visit the church. Apart from this, I said that I was a good friend of the family who had owned the church and property attached to it, and who had maintained it for about a century. The receptionist said that the church was not normally open to visitors and was used as a lecture and exhibition hall by the Istituto. She added that on his return she would ask the Director if I could visit. I left and walked about in the area, returning an hour later. The Director came down from his office to meet me and said that I could pay a visit. I had finally made it.

The founding of the church was on 3 May 1206, as clearly documented at the time.  From 1256 to 1312 it belonged to the Knights Templar as part of a Commandery extending behind it. The Order was suppressed by Pope Clement V, acting under great pressure from King Philippe IV of France. Not satisfied with his judicial murder of most of the Templars, the King also wanted to get his hands on the Order’s property in France. Instead, the Pope decreed that this would revert to the Knights Hospitaller of St. John, wherever it happened to be. The Order of St. John retained ownership of the church and Commandery for a number of centuries.

In the late 18th century the rapidly changing political scenario also affected ownership of San Jacopo and adjacent estate.  These changes were brought to a head by the effect of the French Revolutionary War which resulted in French Republican dominance in Italian affairs, rivalling that of Habsburg Austria. The Habsburg Grand Duke of Tuscany, Ferdinando III, sought to keep a neutral stance especially in the period 1797-1801. In 1801 Napoleon, First Consul of the French Republic decided to juggle about with the map of Italy. The Bourbon Duke of Parma was forced to abdicate and his duchy was merged with the Cisalpine Republic. Ferdinando of Tuscany, also harassed at home by increasingly strong republican elements, was sent packing to the secularised state of Salzburg as its Prince-Elector.

The Kingdom of Etruria

To compensate the heir to Parma, Napoleon established the Kingdom of Etruria with the sickly Ludovico of Parma as King. His short-lived reign ended with the latter’s early death in 1803, succeeded by his son Carlo Ludovico, a 4-year old child under the regency of his Spanish Bourbon mother Maria Luisa.  In late December 1807, Napoleon, by the Emperor of the French, decided to stop appeasing the Spanish Bourbons, for whom he had other, sinister plans. He enforced Maria Luisa’s removal and Etruria became a region of three integral départements of the French Empire.

By then the Order of St. John had been ignominiously expelled from Malta (1798) and its property here in Malta confiscated, as it had already been in France and everywhere else the French marched in. The Order was in complete disarray and divided into factions. By 1808 San Jacopo had been definitely confiscated and become State property. The French left in 1814, Ferdinando III returned and his two successors reigned on until 1860 when the Tuscans overwhelmingly voted for union with Sardinia-Piedmont.

ACKNOWLEDGEMENTS: Nicholas, Marquis de Piro for his invaluable help with certain details, including the black and white photographs.

WIKIPEDIA: (Photograph of The Mystical Marriage of St. Catherine).