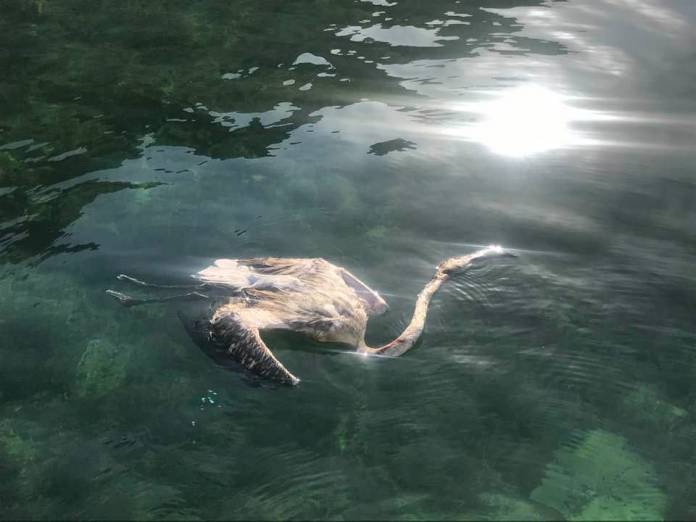 A juvenile flamingo was found dead in the sea in an area known as il-Ħofriet close to Xrobb l-Għaġin, Delimara after it was reportedly shot.

BirdLife Malta have been informed about the case while the incident was reported to the Police.

The person who shared the photos on social media, said that a shot was heard being fired.

Flamingos are currently in their autumn migratory seasons on their way to Africa. They generally travel in flocks of adults and juveniles. However juveniles would occasionally descend to the ground to rest during the journey.

In a statement Kaċċaturi San Ubertu has dissociated itself from any of illegal hunting.

The organization reminded the public that the only season open at the time is that for the hunting and trapping of wild rabbit. It added that cases such as that of the alleged juvenile flamingo was unrelated to the hunting according to law.

Kaċċaturi San Ubertu condemned the act saying that such criminal activity goes against the “ethics and spirit of sustainable hunting”, adding that whoever shot on the juvenile flamingo should be brought to justice.

The Federation for Hunting and Conservation has also joined the Kaċċaturi San Ubertu in condemning the act. It has urged its members who were in the area at the time of the incident to pass on any relevant information to the police. In a strong worded statement the FKNK said that if the perpetrator happens to be one of its members, their membership will be suspended pending proceedings in court, warning that the person could be expelled from the organisation.

The federation noted that its members had taken and published several photos showing flamingos migrating over Malta. In a statement, the FKNK said that its members’ work should not be tarnished by a cowardly act carried out by an unknown individual.

The FKNK maintained that every time a protected bird is gunned down, this reflected badly on the hunters despite it had nothing to do with their principals. It maintained that it could keep silent when faced with such acts that undermine a ‘socio-cultural tradition’ of the locals.

It reminded that the autumn hunting season is round the corner and will open on 1 September.

Two arrested after spate of thefts from vehicles in Delimara