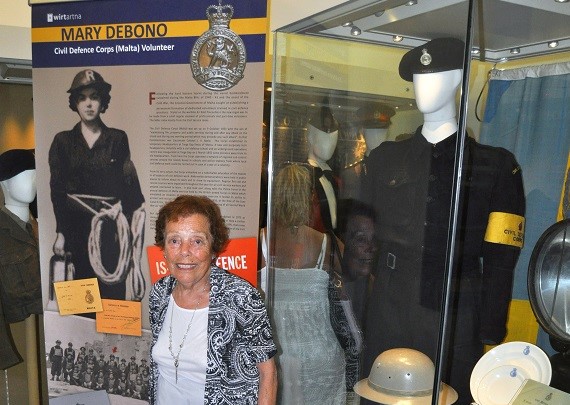 What was the first thing you did after you left school? In the case of Mary Debono, immediately after leaving school in 1951 she joined as a volunteer in the Civil Defence Corps as a rescuer, making her the first Maltese woman to voluntarily join the Civil Defence Corps in Malta. She stayed on till 1956 when she got married and migrated to Australia.

Ms Debono, accompanied by her family after having specially travelled from Australia, was recently present during a commemorative event held by Fondazzjoni Wirt Artna (FWA) at the Malta at War Museum in Vittoriosa to mark the foundation of the Civil Defence and Ms Debono’s role in it.

This comprised a display of Civil Defence memorabilia including a uniform, the Headquarters flag, badges and equipment and publications.

What was the Civil Defence Corps?

Following the hard lessons learnt during the aerial bombardment sustained during the Malta Blitz of 1940 – 1943 and the onset of the Cold War, the Colonial Government of Malta sought at establishing a permanent formation of dedicated volunteers trained in civil defence practices.

Styled on the wartime Air Raid Precautions, it was made from a small regular element of professionals and part-time volunteers. The latter came mostly from the Civil Service ranks.

The Civil Defence Corps (Malta) was set up on the 9th October 1951 with the aim of “maintaining life, property and public services during and after any attack on the island, and during any warning period which may precede any such attack”.

A new and purposely-built headquarters complete with a civil defence school and an underground operations centre was inaugurated at Targa Gap on the 1st March 1955.

From its very outset, the Corps embarked on the education of the masses in all aspects of civil defence work. Nationwide demonstrations were held in public places to inform about its work and to show its equipment. Regular first-aid and rescue courses were organised throughout the year for all civil service workers and anyone interested to learn.  It also took part along with the Police Force in the annual defence of Malta exercise held by the British armed forces in Malta which simulated an invasion of the island.

During this exercise, it tested its ability to protect and rescue civilians ‘caught’ in the attack. In 1956, at the time of the Suez Canal Crisis, the Corps undertook the cleaning and re-opening of all Second World War air raid shelters which were sealed soon after the war.

The Civil Defence Corps was abolished in 1973 and it was only in 1996 that a new Civil Protection Department was forced to fill the void left by its demise.

Amy Borg   March 30, 2020
The government seems to not provide detailed answers or guidance to the queries of some of the companies who have submitted their application to supply a prefabricated hospital for coronavirus patients.

Edinburgh festivals will not take place in August