The WBRU, under the direction of the Ministry of Gozo, is to apply a research derogation to determine that the numbers of 7 finch species captured in Malta are less than 1% of the bird populations’ annual mortality. This is in order to use a legal loophole for finch trapping to go ahead this Autumn.

Finch trapping is illegal under the EU Birds’ Directive since finches are protected species, and it is unnecessary for the practice of bird breeding since finches can be successfully bred in captivity (one reason for Malta having been slammed by the EU for the 2014-2015 trapping season in the C-557/15 judgment).

The WBRU is proposing to allow trappers to catch wild finches in an attempt to encounter finches wearing lightweight metal identification rings fitted by international research groups for the scientific study of wild birds (bird ringing) to find out their origin. However, Gatt stated that it is unclear how ringing control data would address the WBRU’s research question, as the “small numbers” rule they are referring to requires an assessment of species annual survivability.

The percentage of ringing controls for small bird species is typically less than 0.1%; this means that for every 1000 wild birds caught, only 1 is likely to be carrying a ring. Hundreds of thousands of finches would therefore have to be caught in a 62-day study period in order to obtain a significant dataset of previously ringed birds. The deafening bird callers will affect not only the finches, but also other species in the area. Furthermore, the wide-scale use of large clap-nets requires the chemical clearing of undeveloped land which pollutes and scars the landscape for years.

Gatt outlined that it appears likely that the lack of significant wintering populations and the rarity of the occurrence of breeding finches in Malta is a direct result of decades of large scale finch trapping on the islands. Therefore, the 1% loophole becomes inapplicable if it is considered that trappers are actively taking from finch populations that would establish themselves on the Maltese Islands as local breeding birds.

Last month, BirdLife Malta had also criticised the Government for its decision to allow finch trapping for scientific research purposes.

“The Government is weakening and amending laws to create a smokescreen for the illegal killing of birds”
‘Absurd’ – government’s plan to challenge ruling on trapping, BirdLife says 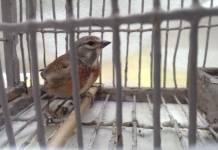 “Only one of the 18 storks still alive” – BirdLife Malta