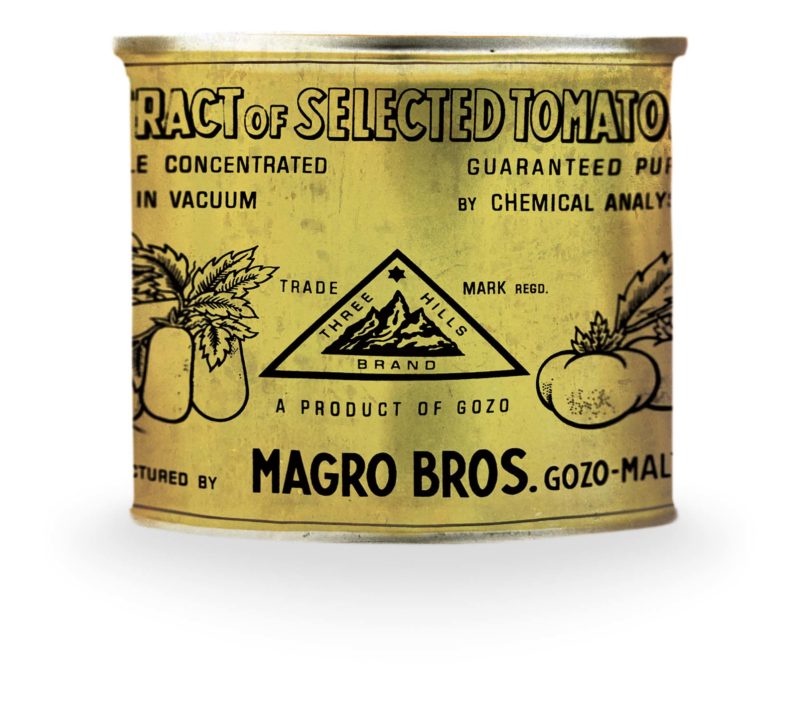 The iconic and quintessential product Three Hills Brand Kunserva will be celebrating its 85th anniversary in 2019.

The story of this much-loved brand was starts with Ganni Magro a humble business man from Xewkija. He had started his general provisions business in 1916. In the 1920s his three sons started to commission and purchase tomato crops from Gozitan farmers, an innovation at the time as tomatoes were only being used in local kitchens during the summer period.

By 1934, the three brothers had taken over the business from their father and established themselves as the leading general merchants and food distributers in Gozo. At that point they decided to start producing Kunserva tomato-paste which was canned into 3 kilo containers for grocers to then sell by weight and rolled in grease-proof paper.

The Three Hills Brand was an immediate success and it quickly became a household name in Gozo and Malta and got known abroad.

An all-natural product, the Kunserva acquires its exceptional taste from the Maltese Summer-grown juicy tomatoes and the secret recipe that was created by the Magros.

Kunserva is still very popular in Maltese kitchens. Current formats of the traditional tomato paste are available in 200 and 400-gramme metal cans, glass jars and squeeze tubes, and catering size. A no-added salt with 30% less sugar version of the Three Hills Kunserva caters for a health-conscious diet. Other versions of the popular Kunserva include the mint and onion, basil and garlic and the Kunserva Pikkanti.