The Malta Union of Midwives and Nurses has urged Prime Minister Robert Abela to not reconsider opening the airport for travel between countries considered to be safe in a statement on Saturday.

The union’s president Paul Pace warned that despite Malta’s success so far when handling the pandemic, one should avoid fostering a false sense of security, underlining that what has been achieved so far could be easily lost due to political blunders.

Referring to statements made by Tourism Minister Julia Farrugia Portelli about nine “safe” countries, the union lambasted the measure as a “purely political one” which was being considered from an economic perspective and which could have huge repercussions on those who reside on the islands.

In a strong worded statement the union reminded Prime Minister Abela that a few thousands of tourists arriving to Malta this summer would not resolve the ailing economy but will instead catalyze the second wave of coronavirus.

Several international organisations have warned states which are seeking to lift off restrictive measures that had been implemented due to the coronavirus pandemic.

Since the first case of coronavirus was detected in Malta on 7 March, the health authorities have implemented various measures in order to curb the spread of the virus. The measures included the shuttering of shops and a ban on public gatherings. Malta has now entered the transition phase with a non-essential retail outlets being allowed to operate subject to a number of measures aimed at mitigating the effects. The authorities are monitoring the ongoing situation before deciding whether they would lift other restrictive measures.

The union noted that senior citizens and individuals considered to be vulnerable have been asked to stay home since they are considered to be most at risk if they contract the virus. It underlined that the “huge” sacrifices made by the public could be easily lost by allowing tourist arrivals during a time when the pandemic is still far from over.

“With all the measures Public Health can try to devise to prevent an outbreak in Malta if tourism is to be considered in Malta, (such as the swabbing of every tourists arriving in Malta) would not be enough to guarantee the safety of the Maltese population. This led to Malta being acknowledged as being one of the best success stories in the world in managing the pandemic today. Whilst this is being used as part of the marketing strategies to attract tourists back to Malta, the same tourist would change or success story to a tragic one,” Pace said. 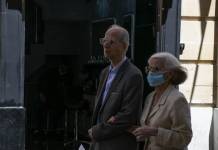 On Saturday 14 new coronavirus cases were detected overnight, nine of which had been asymptomatic.