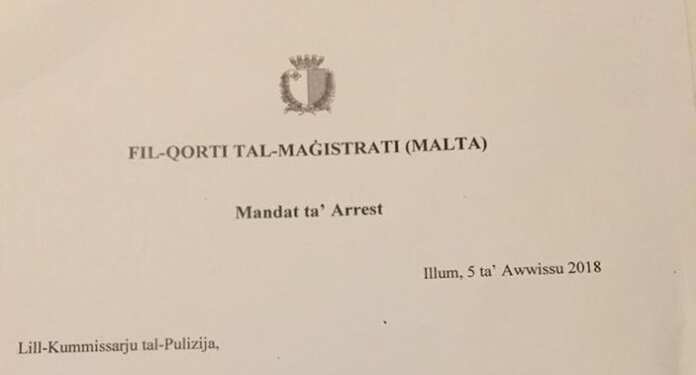 Ferris’ defence counsel, Jason Azzopardi, published the arrest warrant in a Facebook post. The arrest warrant was signed by the duty magistrate two days prior to the police contacting Ferris. He was asked to go to the police headquarters to be interrogated in connection with a magisterial inquiry into the third Panamanian company, Egrant Inc.

In their statement, they reiterated that Ferris was never threatened with an arrest. The Police quoted Ferris saying that had the case would have issued an arrest warrant and in that case he would not have been able to tell them otherwise.

Dr Azzopardi said that while the police denied threatening Ferris with an arrest warrant the photo in his post showed otherwise. He went on to explain that the arrest warrant was issued 48 hours before they called him in for questioning. Azzopardi claimed that the police has a hidden agenda.

The Police claimed that five recorded phone calls were made, four of which came from Ferris himself.

They argued that the arrest warrant was issued as per law and should not be considered as a threat.

On behalf of Mr Jonathan Ferris, both myself & Dr Kris Busietta, whilst making ref to the press release issued now by…