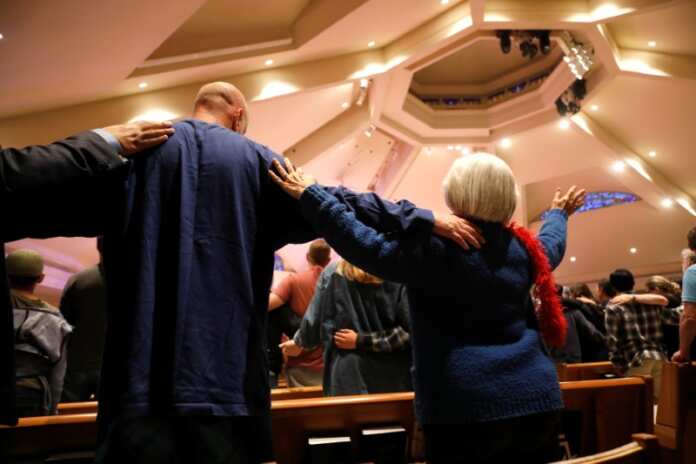 The FBI said on Monday it received multiple tips about a security threat minutes before a gunman opened fire in a California synagogue, killing a woman and wounding three others, but lacked sufficient details or time to prevent the attack.

Police are investigating what motivated a 19-year-old suspect to open fire on the Chabad of Poway synagogue in suburban San Diego on Saturday, including whether to bring hate crime charges against the man who surrendered to police shortly after the attack.

The FBI said it received tips about an online post referring to a potential attack that did not include “specific” information about the post’s author or location. Investigators immediately began working on identifying the author but the shooting began only five minutes after the tips arrived.

“The FBI thanks the alert citizens who saw and reported the post,” the bureau said in a statement.

Members of the synagogue returned to the temple on Monday for the funeral of Lori Gilbert-Kaye, 60, the congregant who was killed in the attack.

Rabbi Yisroel Goldstein, one of three people who were wounded, losing his right index finger in the shooting, presided over the memorial service. He clutched a single yellow flower in his bandaged hand from a bouquet Gilbert-Kaye had sent him at the weekend before her death.

“There’s a big garden out there. God took the rose of the garden, and he brought her up to heaven,” Goldstein said. “We saw the darkest of humanity. I saw it face to face. I wish to never see that ever again.”

Mourners also applauded the heroism of another of their congregants, Oscar Stewart, 51, a U.S. Army and Navy veteran who served in Iraq and who confronted the gunman in the lobby of the synagogue on Saturday and chased the assailant outside.

The shooting occurred six months to the day after 11 worshippers were shot to death at a Pittsburgh synagogue, the deadliest attack ever on American Jewry.

The accused gunman in Saturday’s bloodshed, identified by authorities as John Earnest, fled the scene but called police a short time later in order to surrender.

Earnest, who is being held without bail, appears to have written an online manifesto in which he also claimed responsibility for a pre-dawn arson attack at a nearby mosque last month and professed inspiration from the mass shooting at two mosques in New Zealand that killed 50 people in March.

His parents expressed shock and sadness in a statement on Monday, saying their son had become “part of the history of evil” perpetrated on Jewish people.

“How our son was attracted to such darkness is a terrifying mystery to us,” the statement said. “Our heavy hearts will forever go out to the victims and survivors.”

They said they were cooperating with investigators.

Stewart said in an interview on Monday he was sitting in the temple sanctuary during Sabbath services when he recognised the sound of gunshots.

For a moment he began running towards the exit with other congregants, then turned around and headed towards the gunfire.

“I was an instrument of God,” he said. “I had no conscious effort in what I was doing.” He charged the gunman, screaming, “I’m going to kill you!”

He said he pursued the gunman, who looked frightened and had stopped firing, when he fled the synagogue.

Another worshipper, an off-duty U.S. Customs and Border Protection agent named Jonathan Morales who was armed, also ran outside and fired several shots at the gunman’s car as he drove away.

His 9-year-old niece, Noya Dahan, was also wounded. Her family moved to the United States from Israel in search of a safer life after their home was repeatedly shelled by Palestinian rockets.

Gilbert-Kaye, one of the synagogue’s founding members, was a deeply caring member of the community, her friends remembered.

She drove one congregant who had developed breast cancer to every appointment and helped take care of her children, Goldstein said.

“She is a person of unconditional love,” Goldstein told reporters, adding that he felt Gilbert-Kaye “took the bullet for all of us.”

A friend, Audrey Jacobs, described her in a Facebook post as a “woman of valour” whose final act was to protect others.