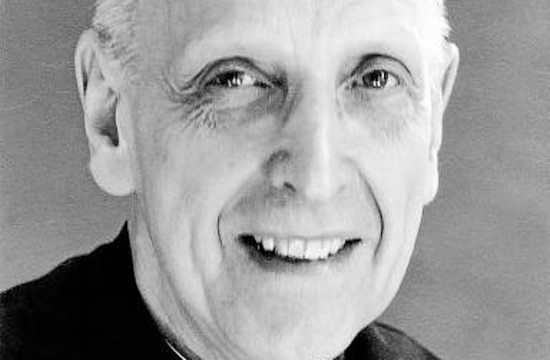 The Jesuit superior general has announced that the Society of Jesus has formally begun the process of beatification for Father Pedro Arrupe, former head of the congregation.

“We have begun seriously the process of beatification of Father Pedro Arrupe, Father Arturo Sosa, the superior general, told some 300 lay people and Jesuits at a meeting of the International Association of Jesuit Universities in Bilbao, Spain.

“We are still at the beginning of the process,” he said, but the Cardinal Vicar of Rome, Angelo de Donatis, has given the approval that the Diocese of Rome, where Arrupe died, is to open the process of beatification.

The current superior general also asked for the collaboration of anyone who has useful information about Father Arrupe, “a man of truth rooted in Christ and dedicated to the mission, whose greatest miracle is that we are here today.”

Father Arrupe is already called a “Servant of God.” Beatification, the declaration that the person is “Blessed,” is the last step before canonization.

This announcement means that the Society of Jesus is committing its resources to moving ahead with the canonization process, such as collecting testimony and soliciting proof of miracles that took place after prayers for Arrupe’s intercession.

The 31st General Congregation of the Society of Jesus elected Arrupe as its new superior general on May 22, 1965, half a year before the close of the Second Vatican Council.

Under his leadership many Jesuits embraced a more social-justice-oriented sense of the traditional Ignatian charism, particularly after the 32nd General Congregation in 1974-75 passed “Decree 4: Our Mission Today: The Service of Faith and the Promotion of Justice.” This has since served as a blueprint for Jesuit apostolic activity.

This direction for the Jesuits led to occasional tensions with Pope Paul VI as well as increased friction with more traditional elements in the Catholic Church.

Father Arrupe had been ill since suffering a stroke in 1981 and also had serious liver problems. Soon after his stroke he resigned as superior general, as his ability to speak quickly degenerated.

Born Nov. 14, 1907, in Bilbao in the Spanish Basque country, Father Arrupe was a missioner in Hiroshima, Japan, when the first atomic bomb was dropped. He became famous worldwide for his description of the horrors of the bomb.

He was highly respected by ecclesiastical and civil authorities. Pope Pius XII sent him a hand-written letter of appreciation for his apostolic efforts.

Father Arrupe was not only a leader but also a profoundly spiritual person. The many trials that the Jesuits endured after Vatican Council II showed him to be an open and strong leader, unafraid of taking risks.

The stroke he suffered while on a flight from Manila to Rome on Aug. 7, 1981, one day after the anniversary of the bombing of Hiroshima, forced his resignation as superior general of the Jesuits.

His last 10 years were marked by both physical and moral sufferings. Father Arrupe died, appropriately, on the eve of the feast day of Paul Miki, the Japanese Jesuit martyr.