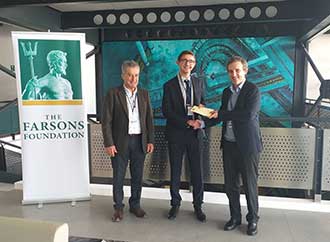 A presentation which took place on the 5th December at the New Farsons Administration Building in Mriehel saw James Hamberger, who recently graduated B.A. Honours in European and Global History from the University of Malta, being awarded the Farsons Foundation Prize for best history honours thesis (2019).

The selection of the winning thesis is made by the History Department.

Hamberger wrote his thesis on ‘The diaries of paymaster John Cecil Baker: The British Mediterranean Fleet, c.1894-1901’. This work takes a micro-historical approach in order to provide an in-depth and personal insight into what life would have been like with the British Mediterranean Fleet, 20 years before the outbreak of the First World War (1914-1918). The main sources used are the diaries and photo album of British Paymaster, John Cecil Baker, found at the Malta Maritime Museum. History honours theses are based on original archival research.

The prize was presented by Michael Farrugia, Director at Simonds Farsons Cisk and Trustee on the Board of The Farsons Foundation. Himself a graduate of History from Edinburgh University, Mr Farrugia wished the graduate well and expressed the hope that the Prize acted as an incentive for students to aim for excellence in their work. He congratulated Mr Hamberger for his success and wished him well in his career choices.

While congratulating Hamberger, the Head of the History Department, Professor Dominic Fenech, once again thanked the Foundation for its support and for renewing the award of the Prize, thus maintaining an association between Farsons and the History Department that had its origins in the 1970s.

Hamberger is currently following an M.A. degree in History by research at the University of Malta and working part-time at Fondazzjoni Wirt Artna.

40 years of brewing Carlsberg in Malta

Watch: “Parents of LGBTQI+ children also have to do their ‘coming...