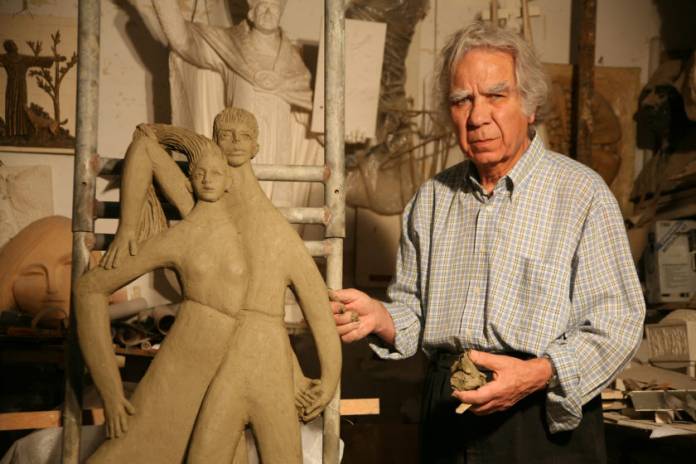 Maltese artist Ġanni Bonnici, one of the country’s pioneers in sculpture, ceramics and the creator of a number of notable monuments, has passed away aged 86. His death was precisely 18 days before his birthday.

His death was announced to the media by his son Hermann Bonnici. Bonnici was well-known in the Maltese art scene for his sculpture, ceramics and medals. He was born on 4 September 1932, famed for designing medals, coins and stamps.

Bonnici began his artistic training at the Malta School of Arts where he studied between 1945 and 1953 before moving to the UK where he specialized in ceramics at the College of Ceramics in Stoke on Trent. He was responsible for a number of monuments both in Malta and internationally, including ‘St. Joseph the Worker’ at the front of the former St. Joseph Secondary Technical School in Paola, Madonna Regina for the Maria Regina Girls’ Grammar School at Blata l-Bajda, St Francis of Assisi (1974) and the Madonna of Porziuncola (1975) for the Porziuncola Retreat House at Bahar ic-Caghaq, and the monument to Dr Nicola Zammit at Siggiewi.

Bonnici is also responsible for creating the commemorative monuments in Senglea, Mosta and Attard to the victims of World War II and more recently the bronze monument commemorating the 10th anniversary of the Works Division in Lija and the ANZAC monument at the Argotti gardens in Floriana.

To commemorate the 25th Anniversary of Malta’s Independence (1989), Bonnici created the country’s Independence Statue from bronze and marble. The statue was erected at the entrance to the Mall in Floriana. The statue stands at 28ft, and is considered the largest creation by Bonnici himself and possibly the tallest statue-based monument in Malta.

The Department is saddened to hear about the passing away of another prominent Maltese artist, Ġanni Bonnici. Bonnici…

Posted by Department of Art and Art History – University of Malta on Saturday, August 17, 2019

Princess Diana statue to be installed on her 60th birthday