A spokesperson for Facebook told Newsbook.com.mt that earlier today some people may have experienced trouble connecting to the apps. The spokesperson said that the issue has been resolved and apologised for any inconvenience that was caused.

Facebook down: Outage affecting various users around the world including Malta

Facebook, Instagram and WhatsApp are all experiencing issues this morning for users worldwide as well as in Malta. Various users found both Facebook and Instagram both inaccessible, with their news feeds refusing to refresh while Facebook.com domain unavailable. 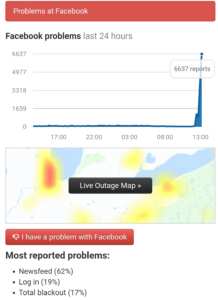 Other users have reported that their messages over WhatsApp are not being sent or received.

Other news sites reported that the outages appear to have started at around 6.30am this morning.