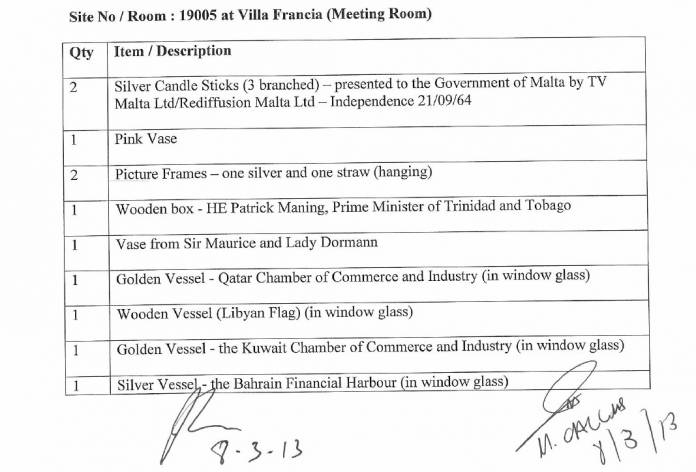 Newsbook.com.mt is publishing in its entirety the gift register dated 8th March 2013 which gives detailed information of the gifts received by Prime Ministers in the PN administrations. It also indicates clearly where each of these gifts was placed. As was reported yesterday by Newsbook.com.mt, the register gives also details of who presented the gifts. The register is dated on the eve of the 2013 election.

In a statement issued by the government Monday evening, it was declared that “it is not true that government found a register of gifts in 2013” while later on in the same statement the government refers to an inventory of gifts “from dignitaries who gave the gifts to the state”. The statement seems to be going to some pains to try to conjure a difference between the register and the inventory where no such difference exists.

Newsbook.com.mt’s sources confirmed once more that the policy in the PN administrations had been for official gifts to go, preferably to the President of the Republic and not to the Prime Minister with minor exceptions such as books and framed photographs of limited value. When a gift exceeded a certain value, it went straight to the inventory

The register in full

The Statement by Government

“We need a change in mentality” – Delia

Amy Borg   February 29, 2020
Interviewed on Net FM on Saturday morning, PN Leader Adrian Delia expressed his support to the Magħtab Farmers who were protesting this morning to safeguard their fields from a proposed Wasteserv expansion project.

Sylvana Debono   February 27, 2020
Speaking at the Gozo Tourism Association AGM, Minister Farrugia Portelli said, in a government statement, that January 2020 was ‘the best ever month for tourism’.

Amy Borg   February 28, 2020
Pope Francis has launched a task force to help Bishops’ Conferences prepare and update child protection guidelines. Archbishop Charles Scicluna will form part of the supervising committee and Dr Andrew Azzopardi will be a member of the task force