The fenkata that had worried Bartolo

Minister Evarist Bartolo, Wednesday morning, reminded his readers on Facebook that three years ago, when the Panama Papers scandal and the involvement of Keith Schembri and Konrad Mizzi became public he had warned against the tandem between politicians and business men.

The revelations of Minister Bartolo, who however did not name names, was considered as shocking when he made it back in 2016. It becomes more shocking today in the wake of the revelations of such connections within the context of the investigation of the assassination of Daphne Caruana Galizia. 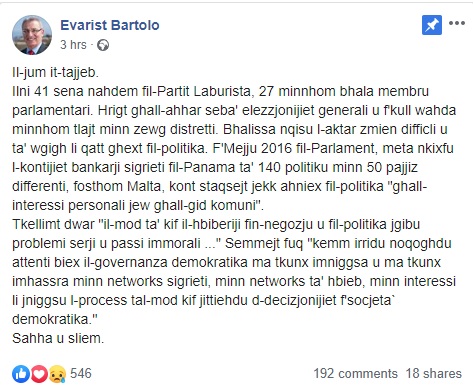 Business deals during a fenkata

In May 2016 Minister Bartolo addressed Parliament during the motion of no confidence in the Prime Minister’s right-hand man, Keith Schembri, because of his involvement in the Panama Papers scandal.

Bartolo said that on becoming a minister in 1966 he was invited by an eminent lawyer to a fenkata at a farm in the south of Malta. He gladly accepted though he was not privy to the guest list. On arrival, he was surprised to find well-known lawyers, members of the judiciary and land speculators. The prandial conversation was anything but light banter. On the contrary, Bartolo said, that the conversation centred on land transfers and large projects.

“I was worried,” Bartolo had told Parliament

Bartolo shared his reflection on the meeting.

“I said: there are political parties; we criticise and confront each other; we write electoral programmes and make speeches; there is Parliament and there are law courts where decisions are taken.

I realised that behind the façade of democracy, important decisions are taken in in back rooms, in farms on Saturday afternoon and not during Parliamentary sittings. Decisions are not taken only in places where electoral programmes are compiled, or by us who do a lot of sacrifices to dedicate ourselves to politics.”

Bartolo said that he only went once to such a gathering. He was never invited again as the organisers realised that he was not ready to play their dirty game. He added that also invitations to go on yachts or to go to the gym dried up.

Bartolo said in his Facebook post that he has been militating in the Partit Laburista for 41 years, twenty seven years of which he was elected to Parliament from two districts.

Bartolo said that this is the saddest and most difficult period of his political life.

Editorial
And nothing but the truth 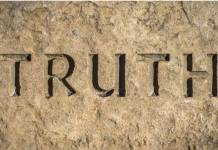