European Commission President Ursula von der Leyen and European Council President Charles Michel this morning signed the agreement on the withdrawal of the U.K. from the EU. The agreement was signed in the presence of Michel Barnier.

In a tweet announcing the move, Michel said: “Things will inevitably change but our friendship will remain. We start a new chapter as partners and allies.” 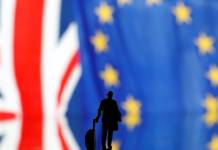 The final vote in the European Parliament will take place next week.