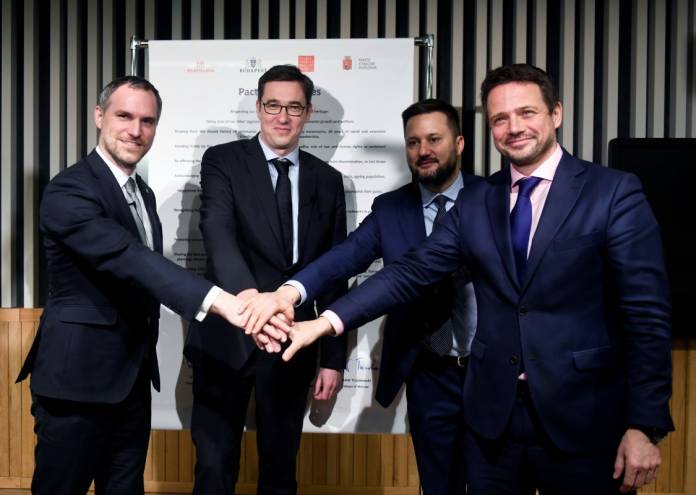 The European Union should bypass national governments that flout democratic standards and deal directly with municipalities as they can perform “miracles” in areas such as climate change, the mayors of four eastern European capital cities said on Monday.

The EU has accused the ‘Visegrad Four’ nations – the Czech Republic, Slovakia and especially Poland and Hungary – of eroding the rule of law in recent years. It has threatened to suspend the voting rights of Poland and Hungary.

At the launch of a new alliance on Monday aimed at securing more direct EU funding, the mayors of Warsaw, Budapest, Prague and Bratislava said they could spend the money more effectively than their central governments, mostly dominated by eurosceptic nationalists.

“The question is whether Europe can step out of its own shadow and do projects directly,” said Gergely Karacsony, a liberal whose victory in Budapest’s mayoral election in October upset the long dominance of Hungarian politics by Prime Minister Viktor Orban’s nationalist Fidesz party.

“Cities can do miracles in the areas of climate change and innovation. This makes the old adage of ‘Think globally, act locally’ especially acute,” he added.

Some EU member states say the disbursement of EU funds for infrastructure and other projects should hinge on respect for democratic standards and the rule of law, which Orban’s government and the ruling conservative nationalists in Poland are both accused of undermining. They deny the accusation.

The mayors said their cities – all in the hands of parties not in national government – should not be made to suffer for policies that were not their responsibility.

They said populist governments often used EU funds to entrench their positions and enrich friends, therefore urgently needed development aid should be channelled directly to cities where in any case the most pressing social and environmental problems are often concentrated.

Warsaw Mayor Rafal Trzaskowski said the cities create a disproportionate share of their countries’ economic output but also have an outsized carbon footprint.

“We have to allocate money to poorer regions so they catch up, but the cities are engines of growth. Governments that take money away from cities for political reasons hurt the entire region,” he said.

Zdenek Hrib, mayor of Prague, Europe’s seventh-richest region, said the economic gauge under which richer regions get less EU aid should be reviewed with factors such as social development also taken into account.

The mayors convened in Budapest at the Central European University, an embattled institution whose teaching has mostly been moved to Vienna following attacks by Orban.