The Maltese don’t seem to recall much what is being debated in the European Parliament but they definitely recall that elections are soon due.

Maltese respondents were in the lowest rungs of those who affirm that they have recently been informed about activities of the European parliament. On the other hand it is in the top four for hearing about the European parliament elections. In a study carried out by the Eurobarometer, ahead of the 2019 European Parliament Elections, Malta is fourth from last, that is, a country where only 43% of those answering the survey said that they had recently been informed on anything to do with the European Parliament. This low recall on news relating to the EP contrast sharply with that of other countries such as Poland and is well below the EU average of 60%. With regards to the European Parliament Elections, Malta goes to the other end of the spectrum and is amongst the highest with recall on the upcoming EP elections. Ranking fourth, Malta’s recall of 57% is way above the Eu average of 47%. 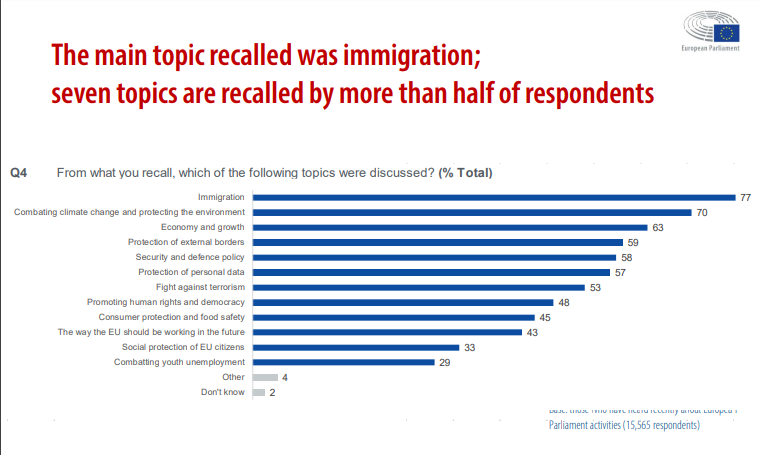 The top three topics recalled were Migration at 77%, Climate change at 70% and Economy and growth at 63%. These were also the most recalled by Maltese respondents. Combating youth unemployment resonated least with the survey cohorts, at a mere 29% recall.