The European Union will draw up a list of new sanctions on Turkey at the end of September unless Ankara comes to the negotiating table to resolve a territorial dispute with Greece and Cyprus, the EU’s Mediterranean states said on Thursday.

Tensions flared between the EU and NATO member Turkey after Ankara sent a survey vessel to map out possible oil and gas drilling prospects in territorial waters claimed by Greece and areas claimed by Cyprus.

The seven EU members with Mediterranean coastlines gathered for a summit in Corsica, France, said in a joint communique they reiterated their “full support and solidarity with Cyprus and Greece in the face of the repeated infringements on their sovereignty (…) as well as confrontational actions by Turkey”.

The summit was attended by Malta’s Prime Minister Robert Abela. 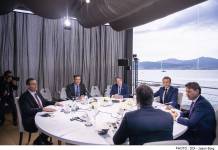 During the summit, the issue of migration in the Mediterranean was given its due weight. Prime Minister Robert Abela said that the migration crisis cannot continue to be tackled on a case by case basis and the European Union cannot continue to leave countries like Malta and Italy to tackle this situation on their own, Prime Minister Robert Abela said.

The problem, he said, was not being given the importance it deserved on the European agenda and although the assistance some countries were giving was acknowledged, leaving boats in the middle of the sea was no longer a solution.