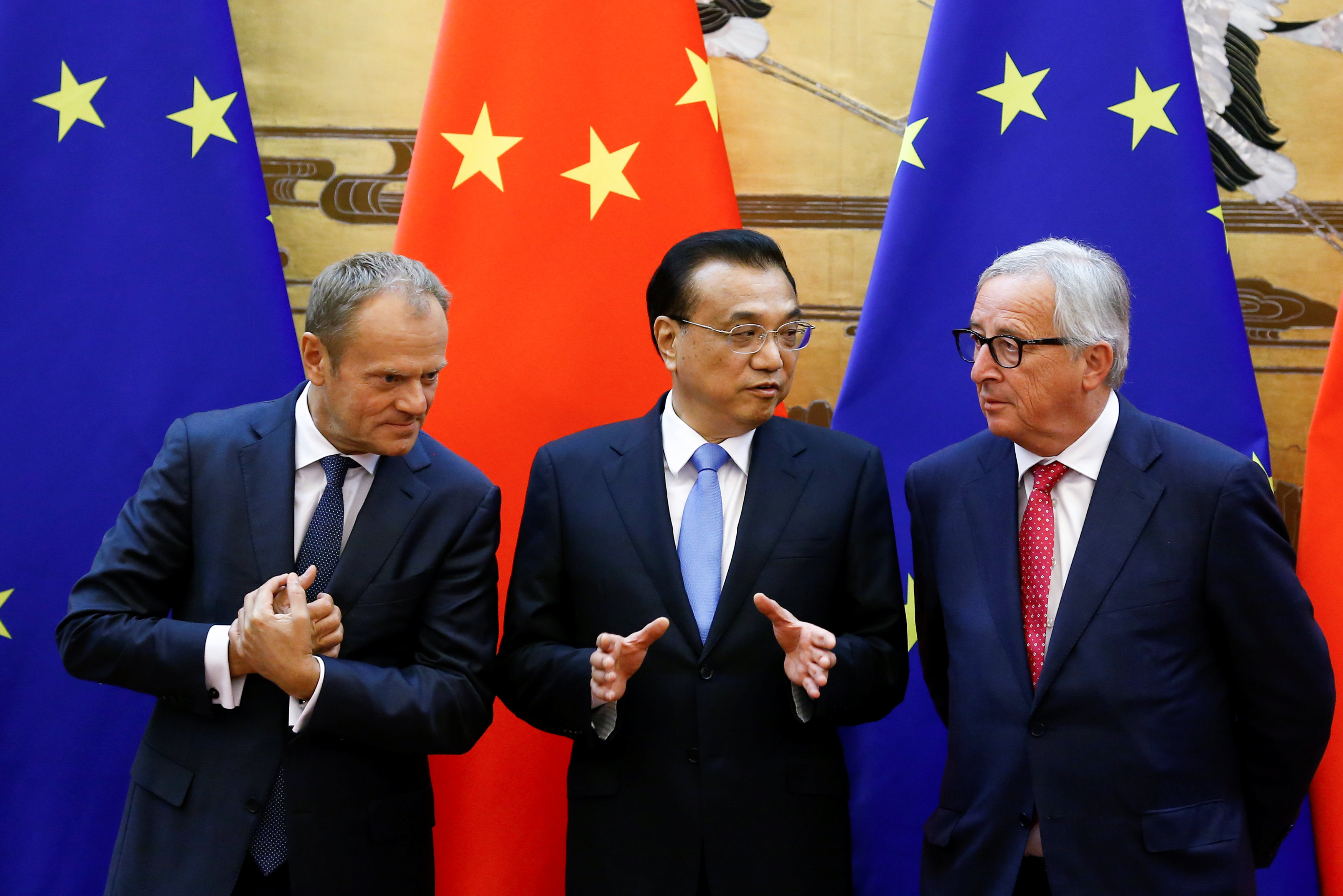 China could open its economy if it wishes, European Commission President Jean-Claude Juncker said on Monday in Beijing, as Beijing comes under growing pressure over its industrial policies amid an escalating trade war with Washington.

Playing host to Juncker and European Council President Donald Tusk, Chinese Premier Li Keqiang stressed the need to uphold free trade and multilateralism as the United States and China become increasingly mired in a trade dispute, with no sign of negotiations on the horizon.

U.S. President Donald Trump has warned he may ultimately impose tariffs on more than $500 billion worth of Chinese goods – nearly the total amount of U.S. imports from China last year – to combat what the U.S says are Beijing’s trade abuses.

China has sworn to retaliate at each step.

Long accused of protectionist tactics that make it a difficult place for foreign firms to operate, China is trying to reverse that narrative amid the escalating trade war by approving huge investments, such as a $10 billion petrochemicals project by Germany’s BASF.

Juncker, speaking at a joint news briefing with Li and Tusk at Beijing’s Great Hall of the People, said that move showed “if China wishes to open up it can do so. It knows how to open up”.

Tusk called on China, the United States and other countries, to not start trade wars, and to reform the World Trade Organisation so it is equipped to combat forced technology transfers and government subsidies, complaints underpinning Trump’s tariffs.

“We need new rules in the areas of industrial subsidies, intellectual property and forced technology transfers, the reduction of trade costs, as well as a new approach to development and more effective dispute settlement,” Tusk said.

“There is still time to prevent conflict and chaos.”

Both China and Europe have stressed the need for trade differences to be addressed through the WTO, but the United States has said China’s unfair policies are too urgent and too big for the trade body to handle.

The China-EU meeting is expected to produce a modest communique affirming the commitment of both sides to the multilateral trading system. Leaders failed to find sufficient consensus for a joint statement after meetings in 2016 and 2017.

European envoys say they have sensed a greater urgency from China since last year to find like-minded countries willing to stand up against Trump’s “America First” policies.

China’s ambassador to the EU on Sunday wrote in Chinese state media that the focus of the annual China-EU leaders meeting would be on how the two sides could become a “standard of stability” amid the “din of unilateralism and protectionism”.

Li said China wanted to improve the authority of the WTO, but did not elaborate. He reiterated pledges that China would significantly improve market access for foreign companies, reduce tariffs and seek more balanced trade with the EU.

“Together speaking out to protect free trade will send a positive signal to the world,” Li said.

The EU, while sharing Trump’s concern over Chinese trade abuses if not his prescription of tariffs, has largely rebuffed efforts by China to pressure it into a strong stance against Trump.

There is deep scepticism in the EU about China’s actual commitment to opening its market further, as well as concern that it seeks to divide the world’s largest trading bloc with its economic influence in Eastern Europe.

Nonetheless, European officials suggest that Trump, who has also targeted Europe with tariffs, has created a window of opportunity to show that EU-China relations can be a bulwark for global trade.

On the eve of his meeting with Russia’s Vladimir Putin, Trump on Sunday rattled allies once more by labelling the European Union a “foe” with regard to trade. Tusk on Twitter called it “fake news”, saying America and the EU are “best friends”.

Coryse Borg   January 23, 2020
St Valentine's Day is just around the corner, and if you haven't yet decided how you are going to spend it with your loved one... we have a great idea for a unique getaway.