As the current EU Disability Strategy comes to an end, the European Parliament has called on the European Commission for an ambitious post-2020 strategy.

The European Parliament said it wants an inclusive society in which the rights of people living with disabilities are protected and adapted to individual needs and where there is no discrimination.

The Parliament said it wants the EU to lead in promoting the rights of people with disabilities and calls for an ambitious, comprehensive and well-funded strategy based on the principles of diversity and full inclusion.

The resolution calls on the European Commission for:

The European Disability Strategy was put in place to implement the UN Convention on the Rights of Persons with Disabilities which states that there should be an international legally binding human rights treaty setting minimum standards to protect the rights of people with disabilities. The EU and all member states have ratified it and are obliged to implement the obligations, according to their competences

Among the concrete initiatives launched thanks to the European Disability Strategy is the European Accessibility Act, which ensures that more products and services like smartphones, tablets, ATMs or e-books are accessible to people with disabilities.

The following are facts and figures on people living with disabilities in Europe; 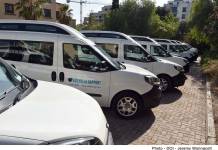 EU parliamentarians to back visa-free travel for Britons after Brexit

Watch: I cannot be certain that serious crimes are being investigated – MEP