“While Malta’s economic performance is expected to remain buoyant, GDP growth is forecast to moderate further to 4.0% in 2020 and 3.7% in 2021. Private consumption is also set to gradually moderate, reflecting a slowdown in job creation.” This was the assessment of the Winter 2020 Economic Forecast published on Thursday. This document assesses the European economy in general and has also a country-specific section. The EU publication projects that the European economy is set to continue on a path of steady, moderate growth. The euro area has now enjoyed its longest period of sustained growth since the euro was introduced in 1999. 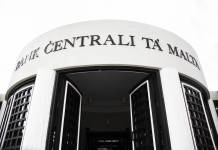 The Eu noted that following a strong increase of 7.0% in 2018, real GDP growth is estimated to have eased to 4.5% in 2019. This was mostly due to a moderation in private consumption and a weaker external environment. Domestic demand remained the main growth driver in 2019, with private consumption supported by a strong labour market. “Public consumption and investment remained solid. Nevertheless, confidence indicators have been easing since autumn, in particular in the services and construction sectors,” noted the document.

According to the Winter 2020 Economic Forecast, the pace of investment growth is set to remain strong as existing projects are expected to mature. In turn, public expenditure growth is projected to ease. Expected gradual improvements in the external environment will likely support some rebound in exports, while the steady increase in imports implies a broadly neutral contribution to growth from net exports.

Valdis Dombrovoskis, Executive Vice-President for an Economy that Works for People, said: “Despite a challenging environment, the European economy remains on a steady path, with continued job creation and wage growth. But we should be mindful of potential risks on the horizon: a more volatile geopolitical landscape coupled with trade uncertainties. So the Member States should use this weather window to pursue structural reforms to boost growth and productivity. Countries with high public debt should also shore up their defences by pursuing prudent fiscal policies.”

The EU Commissioner for the Economy, Paolo Gentiloni said: “The outlook for Europe’s economy is for stable, albeit subdued growth over the coming two years. This will prolong the longest period of expansion since the launch of the euro in 1999, with corresponding good news on the jobs front. We’ve also seen encouraging developments in terms of reduced trade tensions and the avoidance of a no-deal Brexit. But we still face significant policy uncertainty, which casts a shadow over manufacturing. As for the coronavirus, it is too soon to evaluate the extent of its negative economic impact.”

Risks to the forecast

While some downside risks have faded, new ones have emerged. Overall the balance of risks continues to tilt the balance against prospects.

The ‘Phase One’ trade deal between the US and China has helped to reduce downside risks to some extent, but the high degree of uncertainty surrounding US trade policy remains a barrier to a more widespread recovery in business sentiment. Social unrest in Latin America risks derailing the region’s economic recovery. Heightened geopolitical tensions in the Middle East have raised the risk of conflict in the region.

While there is now clarity on trading relations between the EU and the United Kingdom during the transition period, there remains considerable uncertainty over the future partnership with the UK. The outbreak of the ‘2019-nCoV’ coronavirus, with its implications for public health, economic activity and trade, especially in China, is a new downside risk. The baseline assumption is that the outbreak peaks in the first quarter, with relatively limited global spillovers. The longer it lasts, however, the higher the likelihood of knock-on effects on economic sentiment and global financing conditions. Risks related to climate change, though mainly long-term, cannot be ruled out in the short term.

On the positive side, the European economy could benefit from more expansionary and growth-friendly fiscal policies and enjoy positive spillovers from more benign financing conditions in some euro area Member States.

For the UK, a purely technical assumption

Given that the future relations between the EU and the UK are not yet clear, projections for 2021 are based on a purely technical assumption of the status quo in terms of their trading relations. This is for forecasting purposes only and reflects no anticipation or prediction with regard to the outcome of the negotiations between the EU and the UK on their future relationship.

Watch: “We cannot say that we are living in the best of times” – Immanuel Mifsud

Net export contributions will only improve in 2021 – CBM