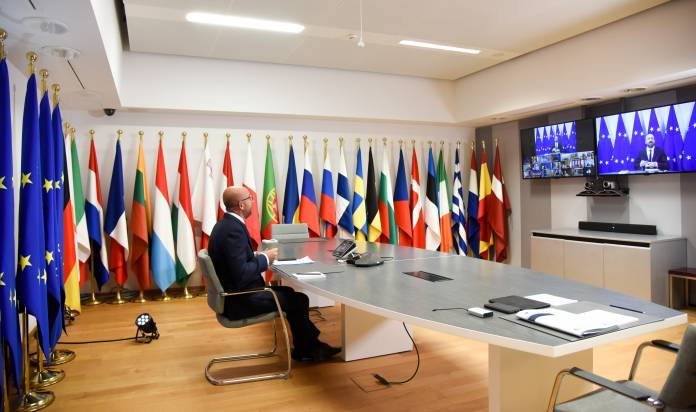 EU leaders expressed their full support for the Belarusian people who want a peaceful transition to democracy after ten days of state repression and violence against protesters.

During a meeting held on Wednesday, the EU leaders stressed their concern about the Belarusian election results validity and made it clear that they intend to increase pressure on those linked to the violent crackdown of protests.

The European Commission President Ursula Von Der Leyen said that Europe is sending the ‘brave people of Belarus’ three clear messages. “Firstly, we stand by the people of Belarus, who want fundamental freedoms and democracy. Secondly, we will sanction all those responsible for violence, repression and falsification of the results of the election. The people of Belarus took peacefully to the streets and the authorities answered with violence, and this cannot be accepted. Thirdly, we are ready to accompany peaceful democratic transition of power in Belarus.”

The members of the European Council condemned the disproportionate and unacceptable violence displayed by the state authorities against peaceful protesters. “Violence must be avoided and all those unlawfully detained must be immediately and unconditionally released. Civil society and opposition actors engaged in discussions of political transition must be protected from arbitrary arrests and violence. The EU expects a complete and transparent investigation into all alleged abuses”, the conclusions of the Council said.

Meanwhile, the EU is expected to impose sanctions against a substantial number of individuals deemed as being responsible for violence, repression and the falsification of election results.

In its conclusions, the EU Council said that “progress made in the past years in the relationship between the EU and Belarus is at risk. Any further deterioration of the situation will impact on our relationship and have negative consequences.”

Tens of thousands protesters rally in Minsk as police detain 250

Pope calls for respect for justice and rights in Belarus