Dutch MEP Sophie In ‘t Velt who headed the mission of the EU Parliament to Malta during an exclusive interview with Newsbook.com.mt agreed that the attitude at the European Council manifests a “You scratch my back, I scratch yours,” attitude. But she said that the situation is not so serious that it can be compared to an Ali Baba and the Forty Thieves story.

Newsbook asked the Dutch MEP about her op-ed in Politico where she lambasted the passive attitude the EU Council takes when confronted by actions of the member states that do not respect the rule of law.

She insisted that the Council has the responsibility to guard the EU values. 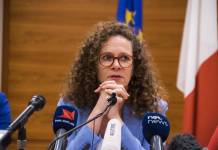 Pass me the butter, please

Newsbook.com.mt quoted from Sophie In ‘t Velt Politico article stating that among the leaders attending the summit there are politicians accused of conflict of interests, the misuse of EU funds, authoritative leasers relapsing judges with loyalists and gagging the independent media, and government under dark clouds of scandal regarding corruption, organised crime and “when it comes to Malta, even murder.”

It is like Ali Baba and the Forty Thieves, Newsbook.com.mt wryly commented.

In ‘l Velt laughs adding that she hopes it is not that bad.

During these meetings the leaders have lunch, discuss, party, decide, etc., said the Dutch MEP.

She adds: Does the Dutch Prime Minister, for example, sitting near Orban ask him to pass on the butter while telling him to stop gagging the media?

She adds that she proposed the setting up a mechanism for an annual evaluation so that problems could be identified early and prevented.

Picking up on Malta?

You are accused of picking up on Malta, noted Newsbook.

No we do not, said In ‘l Velt, who insisted that the EU Parliament treats equally and that criticism has been levelled at several member states. As an example, she mentioned criticism of Hungary, Poland, Slovakia and others.

She emphasised that a problem in one country means a problem for all the rest. If a Polish judge issues an arrest warrant can be judged in other countries execute it if they suspect that Polish judges are not independent?

Institutions are not working well

The official mantra in Malta noted Newsbook.com.mt is that institutions are working well. What do you think?

The Dutch MEP was emphatic:

“No, I do not think that they are working well. Had the institutions been working Daphne Caruana Galizia would not have been killed.”

She added that it seems that now the murder investigations is progressing well, But, she added,  not the same can be said of investigations about the Panama Papers scandal, corruption, money laundering and the medical visas.