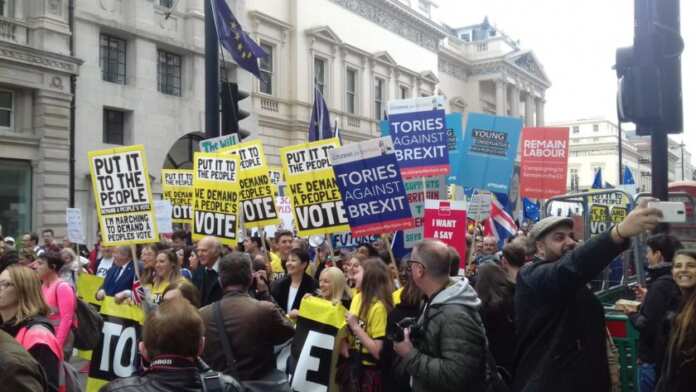 An estimated 1 million people are marching in London today demanding that the government give the British people the final say on the deal that would see the United Kingdom leave the European Union.

According to Simon Thomson, the head of international media at the People’s Vote Campaign, those participating in today’s ‘Put it to the People’ March, are doing so for many different reasons. Some are angry and frustrated with how the Brexit process has been handled politically. Some are former Leave voters who have changed their minds since 2016 and are seeing the consequences. Others are worried about the impacts that leaving the EU will have and is now having up and down the country.

‘People up and down the country are already seeing the impacts of Brexit on their local communities, whether it’s on the cost of living or the growing staffing and funding crisis in the National Health Service. It’s also having an impact on 100s of 1000s of small businesses who are facing increased costs to obtain goods, parts or ingredients.’

Thomson explains that 200 coaches have been laid on to bring people from as far north as the Scottish Highlands as far as South as Cornwall. The striking point made by Thomson is that a number of participants are coming from areas which voted to leave in 2016. ‘There are 19 coaches coming from Yorkshire alone, along with 5 from Leeds. These were big areas which voted to leave in 2016. We also have a train laid on to bring people in from Bristol and Bath. These are 90 year olds, single mothers with pushchairs… many people are coming.’

Together, they are calling for the government to offer them the final decision on the deal which has been negotiated with the European Union.

‘It’s only right to give it back’

When asked to explain how the British public would be given the chance to vote on the deal, Thomson explains that this would be technically up to the Parliament and the electoral commission to decide.

However, he explains that it should be a democratic responsibility not to impose the deal on the people and instead offer them the chance to vote. This would take the form of a binary question which the British public would vote. This would effectively be a third referendum on membership of the European Union.

(Images taken by a tourist, sent to Newsbook)

When asked what would happen if the British public also choose to reject the Brexit deal, the representative of the People’s Vote said that they would ‘accept that but it’s absolutely right that three years on people are given the right to vote on a deal which does not reflect what they were promised before the 2016 Referendum… Brexit promised utopia but those promises could not be fulfilled. Now they know the reality of the situation is very different,’

What happens if the Brexit deal fails for a third time? More votes?

Commenting on the recent developments surrounding the delay on Brexit, Thomson said that the 11th hour display reflected that the UK was ‘grave danger’ with only days until the EU would crash out without a deal.

He explained that the two dates which have been given to the PM reflected that the EU believes she will not succeed in getting her deal through the Parliament.

‘She has two weeks [until 12 April] which she cannot waste and that means she must give MPs time for other options.’

Take A Break from Brexit

Take A Break from Brexit are also participating in the march:

The UK Coordinator for Take A Break From Brexit Andrea Pisauro, explained to Newsbook.com.mt that the March was a clear sign from the British public to the Parliament and Government over the direction of Brexit and their demand for a say in how it’s going.

‘This is not democracy, this is blackmail’

‘There are people here from all parts of the UK, trying to stop this mess and to have a say on the Brexit. The government needs to listen.’, Pisauro said.

‘We are here to send a message of pacification and dialogue that there is another way, a different process. We want to see the country come together on another direction and to allow people to say what the next steps should be.’, he added.