UNHCR, the UN Refugee Agency Office in Malta appealed for responsible rhetoric and constructive dialogue when discussing refugee, asylum and migration issues during the run up to the European elections.

It launched its appeal together with the publication of the second edition of Know the Facts – a toolkit on asylum and migration for the European Elections. The booklet aims to provide MEP candidates and the general public with global, regional and local information on asylum and migration, such as relevant statistics as well as European and Maltese legislation.

As predicted by many the difficult conditions prevailing in Libya caused the exodus of a very large increase in the number of people leaving the North African country by boat. As a result the number of migrants reaching the Maltese shores shot from  23 during 2017 to 1,455 during 2018. A relatively small number of migrants had landed in Malta during 2015 (104) people and in 2016 (25 people).

One fourth of arrivals were children, the vast majority of whom (65 per cent) were unaccompanied minors.

The booklet was launched by UNHCR Malta in collaboration with The European Parliament Office in Malta on 2nd May at Europe House in Valletta. 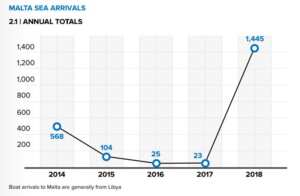 Maltese respondents to research carried by Eurobarometer said that immigration should be a priority talking point in the European Parliamentary elections. According to data gathered on Maltese public opinion, 72% of people said immigration should be discussed more readily during the electoral campaigns. The concerns expressed by the Maltese was almost equally high with all age brackets; with men slightly less concerned than women. This statistic was significantly higher than the EU average of 44% of respondents across the 27 EU member states.

On April 23 President George Vella in a tweet asked why are the UN and the Western world ignoring Libya. Vella said that a humanitarian disaster is developing in Tripoli, Libya and if the world continues to ignore this pending disaster “It will cost us dear!”

The civil war in Libya is making the situation in that country dangerous and chaotic. Several observers as saying that as a consequence the number of people who would try to cross the Mediterranean this year will be higher than last year.

A challenging yet fruitful year for Marsovin

Watch: State of the EU debate; EC president to address the...