Minister for Planning and Environment Aaron Farrugia stressed the need for balance between land use planning and the environment. Once the economy will revive, said the Minister, planning will need to balance out economy and environment. In the last 9 months, said Farrugia, the environment has been placed in in the same ministerial portfolio as planning and prioritised. He referred to the several strategies which have been launched for review or as a basis for strategy, mainly the SPED review which will look into planning policies and the National Environmental strategy which aims to plan ahead for the environment until 2050. Farrugia observed that consensus for planning and environment are necessary if the country is to have any form of tangible improvement over time. Referring to the point made by the archbishop regarding land reclamation and the consequent change in the face of the country, Minister Farrugia said that land reclamation can be useful if carefully and sensitively done. He cited the examples of Msida, Gzira and the Malta Freeport, adding that these contributed to the wellbeing of the country. However, he acknowledged that this is a sensitive subject and studies must be carefully prepared if they are to yield positive results.

Minister Farrugia said that the Planning Authority has been sending signals that land needs to be protected but, he pointed out that owners’ rights, too, need to be considered. He said it was easy to say stop building and curtail height limitations. Minister Farrugia said that while these are being studied, vested rights need to be protected. He added that the zoning of areas which have been included in the development zone through rationalisation has to happen due to vested rights. The minister said that government is also reviewing the rural policy due to controversial practices such as proof of residence which goes back hundreds of years being used to reconstruct new residences in lieu of derelict rural structures.

The minister concluded that the recently constituted Intelligent Planning Forum has been discussing the way forward in planning. He added that in the coming days this will publish its findings.

Need for consensus on mass transportation

Opposition Spokesperson for Energy and Water Management Ing Ryan Callus said that our land is our home and our home does not stop at the door. Speaking during the webinar, Callus warned that if Malta is to abide by its international commitments to reduce ‘dirty’ energy by 27% within the next ten years, then the country must get going since the government has yet to show how this will be achieved. Callus expressed regret that Malta was not investing in cleaner technology such as wind farms and renewable energy. He said that Malta is ideally located to be a centre for research and development for windfarms and yet, in this sector, Malta has lagged far behind. Callus added that the connection to the interconnector had been a positive step since this would have taken up the shortfall when the areas for solar and wind-generated energy ran out.

Ing Callus spoke of the shamble the roads end up in when it rains. He said that investment was needed in catching the water run-off.  Road construction, said Callus, needs to consider seriously stormwater management. He said that the government does not seem inclined to do this as this may impact negatively on the electorate. Callus warned that an across-party commitment needs to be achieved on the issue of mass transportation. This sort of project is bound to span several legislations and the consensus will ensure that the project targets the need of the country and not waver for electoral reasons. 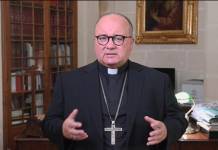 Watch: Judge the government by its decisions – Muscat

Watch: “A flock needs somewhere to live for the shepherd to care for them” – KA