Environment Minister Aaron Farrugia defended the decision to uproot mature pine trees in Attard to make way for the Central Link Project, although he proved somewhat reluctant to confirm the trees’ fate.

During question time on Tuesday’s sitting, the Nationalist Party’s deputy leader David Agius ended up asking three questions on the trees’ removal, including two in which he specifically asked what had happened to the trees.

But Farrugia insisted that Agius’ initial question was not even worthy of an answer, describing it as a remark he could expect on his Facebook page. In turn, he questioned whether the MP agreed with the Central Link Project.

“If it was up to him, the project would have been left undone for years,” the minister said in reply to Agius’ second question, before seeking to make an environmental case for the project by citing an expected reduction in emissions through the widening of roads. He also pointed out that the government would be planting 30 trees for every uprooted one, and that the uprooting was covered by a permit issued by the Environment and Resources Authority.

In his third question, Agius sought to press the minister to state whether the trees were being relocated or whether they had been chopped up.

But while Farrugia pledged to provide a “telegraphic answer,” he simply reiterated his previous justifications and added that he would note the PN’s opposition to the Central Link project. 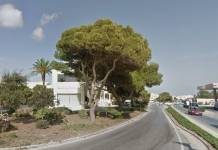 Work on animal cemetery to begin next year