Day and night for months on end hundreds of workers have been toiling with cranes, pipes, concrete blocks and steel rods to complete a new bridge in the northern Italian port city of Genoa by a summer deadline.

Forty three people were killed on Aug. 14, 2018, when the old bridge collapsed, hurling cars and trucks to the ground below and prompting national outrage, especially against infrastructure group Atlantia which had operated it.

Completing the new infrastructure in a timely fashion is key to re-establishing the connection between Genoa and France.

“It is the building site that never sleeps,” Nicola Meistro, Operative Director for Italy’s biggest builder Salini Impregilo, said as he stood under the partially-completed bridge.

A joint venture comprising Salini Impregilo and shipbuilder Fincantieri is responsible for the project, which will cost 202 million euros, excluding the amount needed for the demolition of the old viaduct.

New Genoa bridge expected to be completed by April 2020 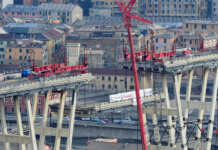 Work has now gone past the halfway mark, with 16 of the 18 planned 40 metre-high (131 feet) columns in place and seven out of 19 deck sections laid.

“The bridge is set to be completed before summer 2020 so we are making every possible effort to meet this deadline,” site construction manager Stefano Mosconi said.

Some 70,000 cubic metres (2472 cubic feet) of concrete have been used in the construction of the viaduct, which stretches about 1 kilometre across the valley.

Much of the work is invisible, with the column foundations sunk 50 metres (164 feet) underground.

Fear sparked amongst Europeans after collapse of Genoa bridge

Security and durability have been central to the project, but so have environmental aspects. In energy terms, the bridge will be self-sufficient, with solar panels providing electricity for the lighting system.