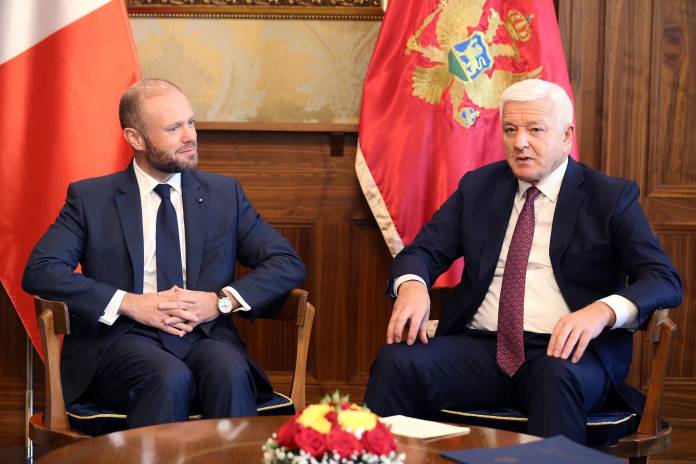 Prime Minister Joseph Muscat described the first investment by state-owned Enemalta in another country as a strong vote of confidence in Montenegro.

Muscat said this during a bilateral meeting with Montenegro Prime Minister Duško Marković. In a government press release it was said that the two sides agreed that bilateral relations are on excellent terms and can result in more opportunities of mutual benefit.

Speaking about the Enemalta investment, Muscat said that there had been other options where to take this project, but Malta opted for Montenegro as a safe partner in which to invest.

Prime Minister Marković said this constructive bilateral visit comes at the right time when relations have started to deliver good results. Marković stated that the investment by Malta in Montenegro’s energy sector is just the beginning. Other sectors, such as tourism, healthcare and culture, can mark new ventures between the two countries. The Prime Minister of Montenegro described how the country has surpassed all economic forecasts and grew by an average of 4.9%. Marković said this trend must continue and Montenegro will be a reliable, strong partner which will welcome investors from Malta which, he said, is a classic example of a successful country.

During the meeting, Muscat said that Malta officially supports the legitimate European aspirations of Montenegro. The Prime Minister remarked that he has publicly expressed disagreement with the decision of the European Council not to give a European perspective to the accession of North Macedonia and Albania. He expressed that this was a strategic mistake, historically and politically, if Europe really wants to be a world actor and have a sphere of influence.

Muscat commended Montenegro on the attitude it took by sticking to the technical evaluations of the European Commission. He then encouraged the country to keep implementing changes and negotiating timelines as this is the best way forward to have enough time to ensure a smooth accession.

In a separate press release, the Government of Malta explained that thanks to its partnership with Shanghai Electric Power, Enemalta has inaugurated a wind turbine project that cost £90 million in Montenegro. The wind park is the first Maltese investment in the energy sector of a foreign country. It involves 23 turbines spread across 13 kilometers of land.

The project was finished in three years and its aimed at generating 112 gigawatt of clean energy per hour.