Malta’s energy provider Enemalta said that the PM’s former Chief of Staff Keith Schembri was not involved in its wind park project in Montenegro. Malta’s National Audit Office told Newsbook.com.mt that it’s still mulling over whether to investigate the project after it faced corruption allegations.

A spokesperson for Enemalta told Newsbook.com.mt that the state-owned company categorically denies that there was any kind of corruption in the project.

Recently, the Government explained that thanks to its partnership with Shanghai Electric Power, Enemalta has inaugurated a wind turbine project that cost €90 million in Montenegro. The project recently faced corruption allegations made by Yorgen Fenech who is currently under arrest in connection with Daphne Caruana Galizia’s assassination. 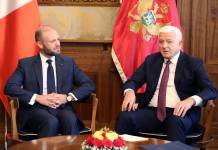 Asked whether Enemalta feels the need to set up an independent investigation into the project, the spokesperson said that the company did not think that this was necessary. He added that Enemalta would fully cooperate in any investigation the competent authorities were to carry out.

While Enemalta told Newsbook.com.mt that Schembri was not involved in the project, on the 18th of November, the Department of Information published a photo showing PM Joseph Muscat at the project’s inauguration. Schembri was Muscat’s Chief of Staff until his recent resignation.

The wind park project was mentioned by Yorgen Fenech while he was being questioned by police. Fenech was arrested in connection with Caruana Galizia’s murder. Court proceedings against him have started recently.

Informed sources told Newsbook.com.mt that Fenech told the police that Keith Schembri sent him a message telling him that “I’ll help you if you keep me out of it” (“Tikxifnix u ngħinek”). Alas, Fenech decided to out the corrupt dealings related to Electrogas and even the windfarms which Enemalta has built in Montenegro.

The National Audit Office (NAO) is still considering whether to investigate the allegations made against Keith Schembri, who is being accused of involvement in corrupt dealings in the Enemalta wind farms project in Montenegro.

NAO still considering whether to investigate Schembri or not

Nicole Borg   January 20, 2020
The Water Services Corporation (WSC) has warned Safi residents about a possible cut in water supply as of this morning. According to a Facebook post, the WSC explained that the supply can be affected because of maintenance work happening through the course of the day in the Safi area.

Reuters   January 19, 2020
Climate activists set off on a three-day hike from Landquart in eastern Switzerland to the ski resort of Davos on Sunday to draw attention to global warming at the World Economic Forum this week.