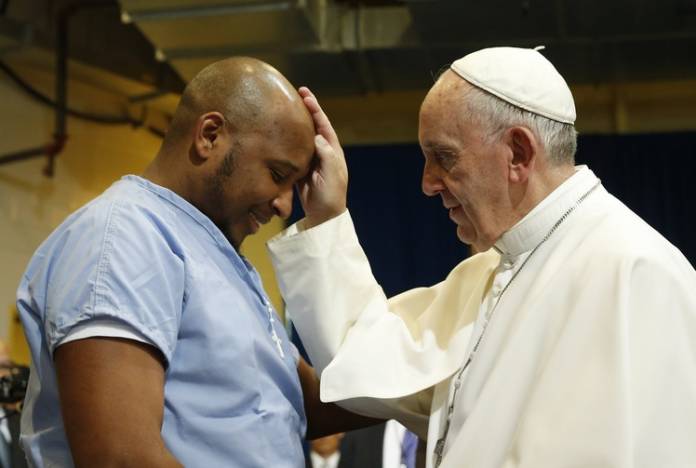 Part of the second and the entire fourth chapter of Pope Francis’s third Encyclical Letter “Fratelli tutti” on fraternity and social friendship are dedicated to the theme of migration. Chapter four is entitled “A heart open to the whole world”.

With their lives “at stake” (37), fleeing from war, persecution, natural catastrophes, unscrupulous trafficking, ripped from their communities of origin, migrants are to be welcomed, protected, supported and integrated.

Unnecessary migration needs to be avoided, the Pontiff affirms, by creating concrete opportunities to live with dignity in the countries of origin. But at the same time, we need to respect the right to seek a better life elsewhere. In receiving countries, the right balance will be between the protection of citizens’ rights and the guarantee of welcome and assistance for migrants (38-40).

Others who are different are a gift

Specifically, the Pope points to several “indispensable steps, especially in response to those who are fleeing grave humanitarian crises”: to increase and simplify the granting of visas; to open humanitarian corridors; to assure lodging, security and essential services; to offer opportunities for employment and training; to favour family reunification; to protect minors; to guarantee religious freedom and promote social inclusion. The Pope also calls for establishing in society the concept of “full citizenship”, and to reject the discriminatory use of the term “minorities” (129-131).

What is needed above all – the document reads – is global governance, an international collaboration for migration which implements long-term planning, going beyond single emergencies (132), on behalf of the supportive development of all peoples based on the principle of gratuitousness. In this way, countries will be able to think as “human family” (139-141).

Others who are different from us are a gift and an enrichment for all, Francis writes, because differences represent an opportunity for growth (133-135). A healthy culture is a welcoming culture that is able to open up to others, without renouncing itself, offering them something authentic. As in a polyhedron – an image dear to the Pontiff – the whole is more than its single parts, but the value of each one of them is respected (145-146).

Politics: a valuable forms of charity

The theme of the fifth chapter is “A better kind of politics”, which represents one of the most valuable forms of charity because it is placed at the service of the common good (180) and recognizes the importance of people, understood as an open category, available for discussion and dialogue (160). In a certain sense, this is the populism indicated by Francis, which counters that “populism” which ignores the legitimacy of the notion of “people”, by attracting consensuses in order to exploit them for its own service and fomenting selfishness in order to increase its own popularity (159).

But a better politics is also one that protects work, an “essential dimension of social life”, and seeks to ensure everyone the opportunity to develop their own abilities (162).

The best help to a poor person, the Pontiff explains, is not just money, which is a provisional remedy, but rather allowing him or her to have a dignified life through work. The true anti-poverty strategy does not simply aim to contain or render indigents inoffensive, but to promote them in the perspective of solidarity and subsidiarity (187). The task of politics, moreover, is to find a solution to all that attacks fundamental human rights, such as social exclusion; the marketing of organs, tissues, weapons and drugs; sexual exploitation; slave labour; terrorism and organized crime. The Pope makes an emphatic appeal to definitively eliminate human trafficking, a “source of shame for humanity”, and hunger, which is “criminal” because food is “an inalienable right” (188-189).

The politics we need, Francis also underscores, is one that says ‘no’ to corruption, to inefficiency, to the malign use of power, to the lack of respect for laws (177). It is a politics centred on human dignity and not subjected to finance because “the marketplace, by itself, cannot resolve every problem”: the “havoc” wreaked by financial speculation has demonstrated this (168).

Hence, popular movements have taken on particular relevance: as true “social poets” with that “torrent of moral energy”, they must be engaged in social, political and economic participation, subject, however, to greater coordination. In this way – the Pope states – it will be possible to go beyond a Policy “with” and “of” the poor (169).

Another hope present in the Encyclical regards the reform of the UN: in the face of the predominance of the economic dimension which nullifies the power of the individual state, in fact, the task of the United Nations will be to give substance to the concept of a “family of nations” working for the common good, the eradication of indigence and the protection of human rights. Tireless recourse “to negotiation, mediation and arbitration” – the Papal Document states – the UN must promote the force of law rather than the law of force, by favouring multilateral accords that better protect even the weakest states (173-175).

(The above report is taken from the official summary supplied by the Vatican.) To follow: Part 4 entitled  “Migrants: a heart open to the whole world”.)