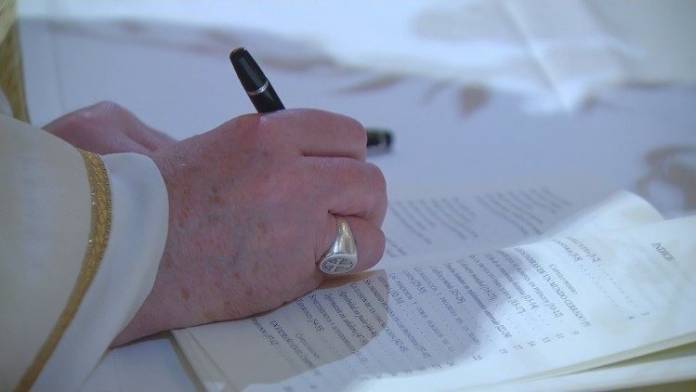 Pope Francis’s third Encyclical Letter “Fratelli tutti” on fraternity and social friendship opens by a brief introduction followed by eight chapters. The Encyclical gathers – as the Pope himself explains – many of his statements on fraternity and social friendship, arranged, however, “in a broader context of reflection” and complemented by “a number of letters, documents” sent to Francis by “many individuals and groups throughout the world” (5).

Dark clouds over a closed world

In the first chapter, “Dark clouds over a closed world”, the document reflects on the many distortions of the contemporary era: the manipulation and deformation of concepts such as democracy, freedom, justice; the loss of the meaning of the social community and history; selfishness and indifference toward the common good; the prevalence of a market logic based on profit and the culture of waste; unemployment, racism, poverty; the disparity of rights and its aberrations such as slavery, trafficking, women subjugated and then forced to abort, organ trafficking (10-24).

It deals with global problems that call for global actions, emphasizes the Pope, also sounding the alarm against a “culture of walls” that favours the proliferation of organized crime, fuelled by fear and loneliness (27-28). Moreover, today we observe a deterioration of ethics (29), contributed to, in a certain way, by the mass media which shatter respect for others and eliminate all discretion, creating isolated and self-referential virtual circles, in which freedom is an illusion and dialogue is not constructive (42-50).

Love builds bridges: the example of the Good Samaritan

To these many shadows, however, the Encyclical responds with a luminous example, a herald of hope: the Good Samaritan. The second chapter, “A stranger on the road”, is dedicated to this figure.

In it, the Pope emphasizes that in an unhealthy society that turns its back on suffering and that is “illiterate” in caring for the frail and vulnerable (64-65), we are all called – just like the Good Samaritan – to become neighbours to others (81), overcoming prejudices, personal interests, historic and cultural barriers. We all, in fact, are co-responsible in creating a society that is able to include, integrate and lift up those who have fallen or are suffering (77). Love builds bridges and “we were made for love” (88), the Pope adds, particularly exhorting Christians to recognize Christ in the face of every excluded person (85).

Defeat the virus of radical individualism

The principle of the capacity to love according to “a universal dimension” (83) is also resumed in the third chapter, “Envisaging and engendering an open world”.

In this chapter Francis exhorts us to go “‘outside’ the self” in order to find “a fuller existence in another” (88), opening ourselves up to the other according to the dynamism of charity which makes us tend toward “universal fulfilment” (95). In the background – the Encyclical recalls – the spiritual stature of a person’s life is measured by love, which always “takes first place” and leads us to seek better for the life of the other, far from all selfishness (92-93).

A fraternal society, therefore, will be one that promotes educating in dialogue in order to defeat the “virus” of “radical individualism” (105) and to allow everyone to give the best of themselves. Beginning with protection of the family and respect for its “primary and vital mission of education” (114).

There are two ‘tools’ in particular to achieve this type of society: benevolence, or truly wanting good for the other (112), and solidarity which cares for fragility and is expressed in service to people and not to ideologies, fighting against poverty and inequality (115).

The right to live with dignity cannot be denied to anyone, the Pope again affirms, and since rights have no borders, no one can remain excluded, regardless of where they are born (121). In this perspective the Pontiff also calls us to consider “an ethics of international relations” (126), because every country also belongs to foreigners and the goods of the territory cannot be denied to those who are in need and come from another place. Thus, the natural right to private property will be secondary to the principal of the universal destination of created goods (120).

The Encyclical also places specific emphasis on the issue of foreign debt: subject to the principal that it must be paid, it is hoped nonetheless that this does not compromise the growth and subsistence of the poorest countries (126).

(The above report is taken from the official summary supplied by the Vatican.) To follow: Part 3 entitled  “Migrants: a heart open to the whole world”.)

Watch: “If we cage up those who come here, they will be filled with anger” – Archbishop Scicluna

Drug use and possession land over 5,000 in court