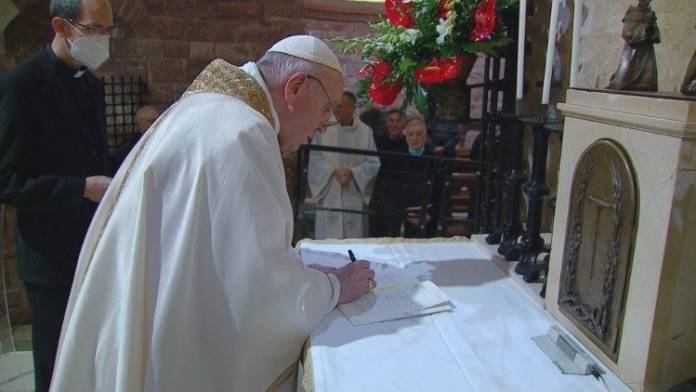 On Saturday October 4 the feast of St Francis of Assisi Pope Francis’ visited Assisi to sign his third Encyclical Letter “Fratelli tutti”. This encyclical letter on Fraternity and Social Friendship,  was inspired by St. Francis, like the Pontiff’s second Encyclical Laudato Si, on the Care of Our Common Home.  The text presents to some extent the Pope’s vision for a post-pandemic world, a subject which the Pope addressed in many times.

What follows is the first part of the summary of the Encyclical letter supplied by the Vatican’s Press Office.

A better kind of politics

This is mainly the question that “Fratelli tutti” is intended to answer: the Pope describes it as a “Social Encyclical” (6) which borrows the title of the “Admonitions” of Saint Francis of Assisi, who used these words to “address his brothers and sisters and proposed to them a way of life marked by the flavour of the Gospel” (1). The Poverello “did not wage a war of words aimed at imposing doctrines; he simply spread the love of God”, the Pope writes, and “he became a father to all and inspired the vision of a fraternal society” (2-4).

The Encyclical aims to promote a universal aspiration toward fraternity and social friendship. Beginning with our common membership in the human family, from the acknowledgement that we are brothers and sisters because we are the children of one Creator, all in the same boat, and hence we need to be aware that in a globalized and interconnected world, only together can we be saved. The Document on Human Fraternity signed by Francis and the Grand Imam of Al-Azhar in February 2019 is an inspirational influence cited many times.

Fraternity is to be encouraged not only in words, but in deeds. Deeds made tangible in a “better kind of politics”, which is not subordinated to financial interests, but to serving the common good, able to place the dignity of every human being at the centre and assure work to everyone, so that each one can develop his or her own abilities. A politics which, removed from populism, is able to find solutions to what attacks fundamental human rights and which aims to definitively eliminate hunger and trafficking.

At the same time, Pope Francis underscores that a more just world is achieved by promoting peace, which is not merely the absence of war; it demands “craftsmanship”, a job that involves everyone. Linked to truth, peace and reconciliation must be “proactive”; they must work toward justice through dialogue, in the name of mutual development.

This begets the Pontiff’s condemnation of war, the “negation of all rights” and is no longer conceivable even in hypothetically “justified” form, because nuclear, chemical and biological weapons already have enormous repercussions on innocent civilians. There is also a strong rejection of the death penalty, defined as “inadmissible”, and a central reflection on forgiveness, connected to the concepts of remembrance and justice: to forgive does not mean to forget, the Pontiff writes, nor to give up defending one’s rights to safeguard one’s dignity, which is a gift from God.

No one can face life in isolation

In the background of the Encyclical is the Covid-19 pandemic which, Francis reveals, “unexpectedly erupted” as he “was writing this letter”. But the global health emergency has helped demonstrate that “no one can face life in isolation” and that the time has truly come to “dream, then, as a single human family” in which we are “brothers and sisters all” (7-8).

(The above report is taken from the official summary supplied by the Vatican.) To follow: Part 2 entitled No to a “culture of walls”.)