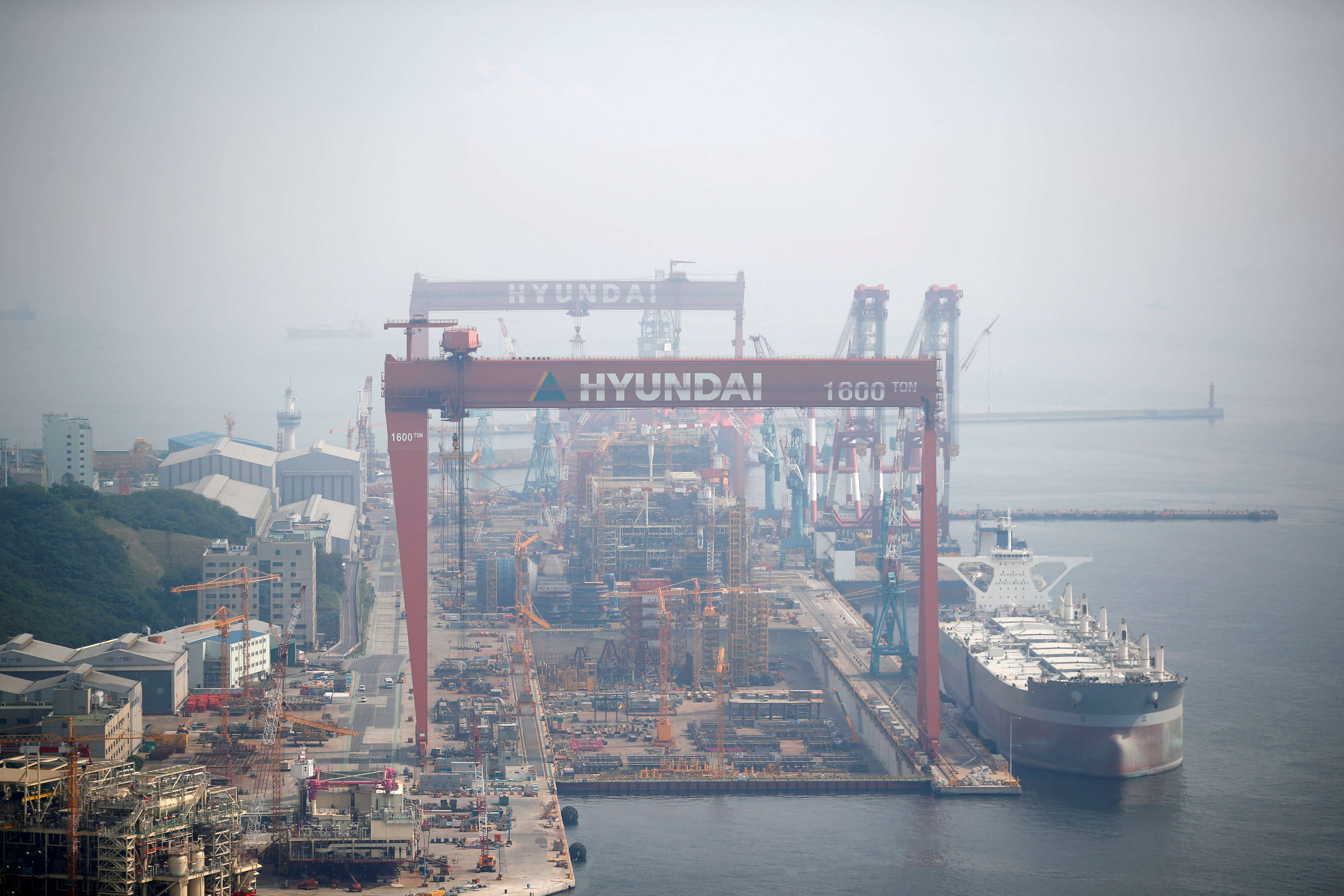 But the 52-year-old was laid off in January, joining some 27,000 workers and subcontractors who lost their jobs at Hyundai Heavy between 2015 and 2017 as ship orders plunged.

To support their family, Lee’s wife took a minimum wage job at a Hyundai Motor supplier. His 20-year-old daughter, who entered a Hyundai Heavy-affiliated university hoping to land a job in Ulsan, is now looking for work elsewhere.

The Lee family’s fortunes mirror the decline of Ulsan, which is now reeling from Chinese competition, rising labour costs and its over-reliance on Hyundai – one of the giant, family-run conglomerates or chaebol that dominate South Korea.

Generations of Hyundai workers like Lee powered South Korea’s transformation from the ashes of the 1950-53 Korean War to an industrial and manufacturing powerhouse, making the southeastern port of Ulsan the country’s richest city by 2007.

But some experts say the chaebols have now become complacent and risk averse, failing to keep pace with their overseas competitors.

South Korea’s focus on exports has also made Asia’s fourth-largest economy vulnerable to growing protectionism by major trade partners and other external shocks.

“Hyundai was everything to me. I feel hopeless,” Lee said at his apartment, a high-rise complex popular with Hyundai Motor workers 10 km (6 miles) from the automaker’s factory.

With young people fleeing in search of jobs, Ulsan is now the fastest-aging city in the country, according to Statistics Korea. The city’s population of 1.1 million has more than quadrupled since 1970, but fell for the first time in 2016 even as population grew in the rest of the country.

Once a prosperous town

In many ways, the challenges facing Ulsan mirror those faced in the American Midwest in the 1970s and 1980s, when the once prosperous industrial heartland was hit by massive job and population losses.

Some experts and industry executive warn Ulsan – home to the world’s biggest shipbuilder and largest carmaking complex – might be South Korea’s ‘Rust Belt’ in the making.

“It could be worse here, since it’s all about Hyundai and its suppliers,” said Mo Jong-ryn, a professor of international political economics at Yonsei University in Seoul. “There is no alternative.”

In the wake of the downturn, Hyundai Heavy has been selling assets such an employees’ dormitory, and a large foreign community complex it used for clients such as BP and Exxon Mobil and their families, officials say. The foreigners’ complex featured townhouses, a golf course, a swimming pool and school.

A spokesman said Hyundai Heavy was doing its utmost to “normalize our company”, working with labour unions to address a lack of work and an idled workforce.

Eom Soon-ui runs a small noodle place in a traditional market blocks away from Hyundai Heavy’s headquarters. One recent workday, the market was mostly empty, with about a dozen restaurants as well as uniform shops catering to shipyard workers closed.

“Hyundai makes or breaks for merchants like us. They’re doing poorly, so I’m struggling to make ends meet,” she said.

Ulsan accounted for 12 percent of South Korea’s exports last year, the lowest since 2000 and down from its peak of 19 percent in 2008, according to customs data.

The city also has seen a rising number of suicides and now has the highest suicide rate in the country for those aged between 25 and 29, according to Statistics Korea.

Ulsan University Hospital, run by Hyundai Heavy, recorded 182 suicide attempts in the first half of this year, compared to about 150 a year earlier, a hospital official said.

Taxi drivers have been told by police not to drop people off on Ulsan’s newly built bridge after three people killed themselves there in just one month.

DOMINANT AT HOME, BUT FALTERING ABROAD

After massive shipbuilding job losses, auto workers fear it could be their turn next.

Hyundai Motor has been already moving some production offshore, and an internal forecast seen by Reuters shows domestic output is expected to fall to 37 percent this year, down from nearly 80 percent in 2004.

But workers say many of Hyundai’s problems are its own making, like failing to forecast a SUV boom in the key U.S. market and missing the shift to electric cars.

Hyundai Motors declined to comment for this story. Earlier this year, it pledged to hire 45,000 across the group over the next five years and invest heavily in new businesses including “wearable robots” and artificial intelligence.

However, some experts say South Korea’s reliance on a few powerful chaebol is holding the country back.

South Korea’s top 10 conglomerates had revenue equivalent to 66 percent of the country’s gross domestic product in 2017. By comparison, the combined revenue of America’s top 500 companies was 65 percent of U.S. GDP, according to Fortune magazine’s annual survey last year.

Because of their near monopolistic market positions at home, conglomerates have been reluctant to take risks and slower to innovate, Lee said.

Faltering in key overseas markets, South Korea forecasts export growth will slow to 5.3 percent in 2018 and 2.5 percent next year, from 15.8 percent last year.

No longer a paradise

That means more pain for Ulsan and other exports hubs.

South Korean President Moon designated Ulsan and several other cities as “industrial crisis zones” in May, setting aside 1 trillion won (697.11 million pounds) this year to support affected workers and suppliers, and to promote new industries.

Moon says the chaebol-oriented economic policy has reached its limit, and has widened the gap between haves and have-nots.

Under a new policy of “innovative growth”, Seoul is boosting investment in fuel cells and self-driving cars, “smart factories” and drones, as well as artificial intelligence, the internet of the things and big data.

Lee, the former Hyundai Heavy worker, learned painting and molding to do home interior work, but is struggling to find a job because the downturn has also hit the real estate sector.

Ha M.H., who came to Ulsan in 1982, said he is leaving Hyundai Heavy in August after 36 years, because the company’s backlog for offshore platforms has run dry.

“Foreign inspectors from Scotland and elsewhere who used to work here in good old days still call Ulsan a paradise,” Ha said. “All of my friends have left, and I am the last man standing.”