The embellishment of Pjazza San Franġisk in Victoria is set to cost a little over €2.5 million, according to Gozo Minister Clint Camilleri.

In replies to parliamentary questions by Nationalist MPs Chris Said and Kevin Cutajar, Camilleri said that the contract for the embellishment of the square itself cost €2.18 million. However, steps and a passenger lift are also being built to link the square to the Victoria Bus Terminal; the contract for this project is worth a little over €334,000.

The project is set to be completed in early summer.

St Francis Square to be opened in time for summer – Camilleri 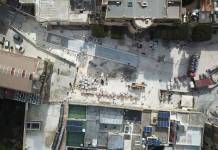 The original plans for the embellishment had been scrapped, and in response to a query by Said, Camilleri said that changes to these plans took place following consultations. However, he did not elaborate on the costs incurred as a result of this change.

The public consultation had been concluded in January 2018, and the tender for the steps had to be issued three times: Camilleri’s predecessor Justyne Caruana had explained that in the first two calls, the offers made were non-compliant.

The square is named for the Church of St Francis and the adjacent Franciscan convent. It is also home to the Ministry for Gozo.