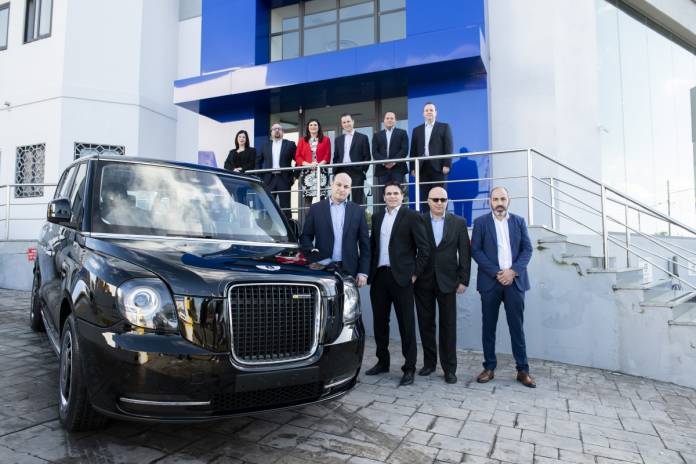 A London icon is about to become a familiar sight in Malta, as Malta’s leading automotive & marine company, GasanZammit Motors Ltd. will be increasing its portfolios of renowned motor brands with the launch of LEVC – the London Electric Vehicle Company.

The latter is London’s first 100% electric black cab for 120 years.

The British company, owned by China’s Geely group, will be opening up a new market locally with its hybrid taxi, which combines an electric drive with a combustion engine as a range extender. The LEVC TX eCity has been recently launched in other countries, including in Japan. Moreover, the company has lately opened a sales office in Frankfurt and has already sold vehicles in across Europe, with the next taxi stop being Malta. LEVC are also planning expansion to Asia-Pacific and the Middle East later this year.

“We are excited to welcome LEVC to Malta and to be the official importer and dealer of the British-built range-extender taxi. No doubt, the arrival of this motor make locally, will set new standards across the Maltese islands in the taxi and first-class shuttle market, delighting passengers, drivers and fleet operators alike. During recent years, the international company has been transformed from a traditional taxi manufacturer to a green mobility company, producing a wider range of electric commercial vehicles,” said Stefan Deguara, CEO of GasanZammit Motors Ltd.

Future urban transport is already changing rapidly and GasanZammit Motors Ltd., grabbed this golden opportunity to bring something new, that offers the best solutions to the green logistics trend, to the local market. The retailer of purpose-built commercial electric vehicles, are renowned to produce durable, reliable, efficient, cost effective and high quality taxi cars. Since 2013, the automotive engineering company ambition was to become Europe’s leader in green commercial mobility solutions.

The black cab into the 21st century

LEVC claims to have sold 4,000 hybrid-electric vehicles globally since the TX EV model launch in early 2018. This vehicle is described as LEVC’s electric taxi that took the black cab into the 21st century. Most of these electric taxis can be found in London, where regulation is forcing cabbies to electrify gradually.

In Malta, for the past years, Government has been providing a financial scheme in favour of more sustainable means of transport. For 2020, the Government has increased the money allocated for this scheme to €3.5 million, with the aim of sustaining the environment through greener vehicles. The mentioned scheme includes new wheelchair accessible taxis or passenger vehicles.

A LEVC taxi car offers drivers and fleet owners benefit from the cars turning circle and an electric powertrain that delivers 80 miles (130km) of pure electric range with a total range of 377 miles (600km) due to the on-board range-extender. LEVC’s range will grow further this year with the so-far delayed launch of a new electric van now expected in Q4, which shares the same technology as the TX. The company also recently launched the TX Shuttle model, which is focused on the ride-sharing and taxi markets across Europe.

LEVC’s latest model, the electric TX Taxi, is described as a plug-in hybrid range-extender electric vehicle. It has an initial range of around 80 miles, plus a full range of just less than 400 miles when the on-board range extender is in use. Like all legendary London taxis, it has an impressive turning circle – just 8.45 metres. On-board there are plenty of premium features like charging points for mobile phones and laptops, a panoramic roof, and unrivalled cabin space. No doubt, the LEVC TX electric taxi is claimed to be the world’s cleanest and advanced taxi. The cab comes with an eCity technology. The new TX taxi also features multiple active and passive safety systems, which ensure that the vehicle and pedestrians on the road stay safe. For this, the cab comes with an autonomous emergency braking system, collision warning, and emergency brake assistance.

Later on this year, the British company will be launching a new electric van; the clean and green urban delivery van of tomorrow. The new van has been designed to meet rapidly increasing global demand for green, electrified commercial transport; medium-sized vans capable of moving goods around urban areas efficiently, while helping to improve air quality. This model will give operators and drivers huge amounts of flexibility with an electric range of 80 miles and a combined petrol and EV range of 377 miles.

The world’s most advanced taxi

In London, and in all the countries where LEVC has been launched, this brand has proved a success with drivers and passengers, offering a quieter, cleaner and smoother ride for passengers, while cheaper running costs for owners. LEVC’s goal has always been to make its brand the world’s most advanced taxi and six years on, from the start of this project, the endorsement from drivers is compelling while passengers love LEVC’s comfort, space and connectivity features.

GasanZammit Motors Ltd believes that LEVC’s fleet of cars will be appealing to operators of taxi in Malta, empowering fleet operators and e-mobility service providers to take a new approach. Moreover, thanks to its combination of greater space, agile manoeuvrability and far better wheelchair access, not to mention its iconic status as the original London cab, the local automotive and marine company, is convinced that this new brand of cars in Malta will set new standards across Malta in taxi service, delighting passengers, passengers, drivers and fleet operators alike.