The 71-year-old Mosta man that fell while working in Iklin died. The Police released a statement this afternoon.

The accident happened in Triq il-Wied in Iklin at around noon on 1 December. The man was working at the block of apartments when he fell and was immediately taken to Mater Dei, said the Police. He was certified in a critical condition.

The police are investigating the accident. Magistrate Marseanne Farrugia is leading an inquiry. 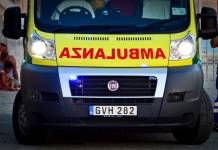