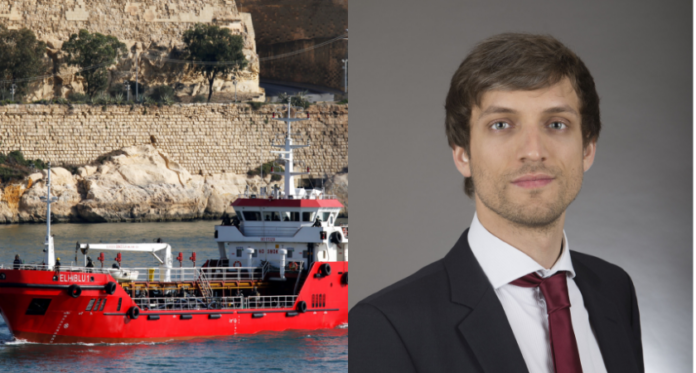 The definition of piracy in the international law of the sea is a historical one.

To understand better what constitutes piracy, Newsbook.com.mt interviewed lawyer Valentin Schatz, a research associate and Ph.D. candidate at the Chair of International Law of the Sea and International Environmental Law, Public International law and Public Law (Professor Alexander Proelss) of the University of Hamburg, Germany.

In the last week of March, merchant vessel El Hiblu 1 was asked to conduct a search and rescue mission. Some 100 asylum seekers were brought to safety on board the vessel. However the vessel was later rerouted due to an alleged hijack, and it brought the asylum seekers to Malta.

While the event was still unfolding, the Italian Minister of the Interior Matteo Salvini had made headlines in Italy alleging that the case was one of ‘piracy on the high seas’. The Maltese media was quick to pick up Salvini’s statements.

Newsbook.com.mt contacted Schatz in order to delve into what constitutes an act of piracy under the international law of the sea.

Schatz explained that the generally-recognised definition of piracy is found in the Law of the Sea Convention of 1982. He further explained that, for an act to constitute an act of piracy, there are several requirements which need to be fulfilled. Given that the definition is a historical one, piracy involves act of violence, detention or depredation (the act of attacking or plundering) against a vessel by another vessel on the high seas for private ends.

Before proceeding to explain better the requirements as outlined in the international law of the sea, Schatz clarified that, as it is, piracy is not really a crime, but rather a rule that would allow a state to exercise their jurisdiction over a person or vessel, once the requirements are fulfilled. It is then up to the states themselves to enact criminal laws applicable to such acts. He then explained that whenever the international law definition of piracy is fulfilled, then any state could exercise criminal jurisdiction.

Schatz pointed out that in the case of Malta, the authorities did not intercept the ship on the high seas, and chose to wait for El Hiblu to actually arrive in Maltese waters before they exercised any jurisdiction. Schatz remarked that this could have been because the Maltese authorities were aware that this was not a case of piracy.

The three requirements according to international law of the sea

The international law of the sea has three requirements for an act of piracy to be fulfilled, it needs to occur on the high seas, it needs more than one ship and the person/s carrying out the act of piracy need to be doing so for private ends.

According to the facts at hand, in the case of El Hiblu 1, the rescuees allegedly took over the vessel in Libya’s territorial waters. By definition, Schatz asserted this could not be thought of as piracy under international law. He then explained that as soon as the vessel entered Maltese territorial waters, then it was subject to Maltese law. Malta is a member of the Convention for the Suppression of Unlawful Acts against the Safety of Maritime Navigation, and therefore it is expected to exercise jurisdiction over such situations of vessel hijackings which constitute a threat to maritime security, Schatz explained.

Speaking about another requirement, that of needing more than one vessel, Schatz explained that while there were indeed two vessels originally; the asylum seekers were brought to safety from their boat onto the vessel. He explained what later happened on El Hiblu 1 was allegedly committed by the passengers on the vessel and rather than constituting piracy it was a matter of the flag state. He likened the incident to a mutiny on a vessel, Schatz explained that if the case had happened on the high sea then the flag state would be responsible for exercising its jurisdiction while had it happened in the port or territorial waters, then the coastal state could also assume responsibility over the crime.

The third criterion, Schatz explained was ‘private ends’; however, its definition could be disputed. He distinguished between the strict and broad definitions as to what constitutes ‘private ends’.

Referring to the anti-whaling activities in the Antarctic by NGOs against Japanese whaling vessels, he said while the NGOs committed violent acts, the acts were political in nature and not for private gain. However, some would argue that any acts committed for ends that are not sanctioned by a government are for ‘private ends’.

Commenting on El Hiblu 1, Schatz explained that the definition of piracy under the international law of the sea was a cumulative one, thus already one missing criterion would mean that the act was not a case of piracy. In the El Hiblu 1 case at least two criteria were not fulfilled.