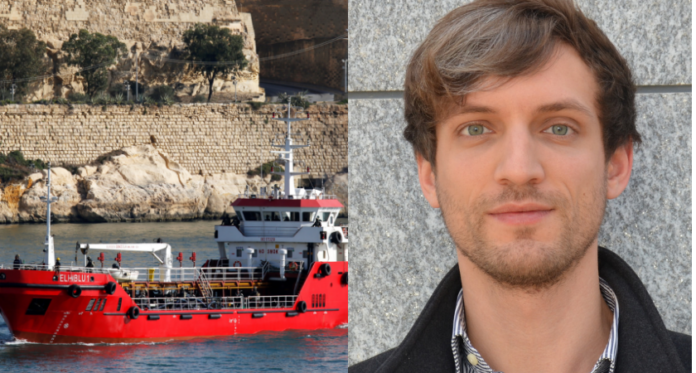 In the first part of the interview with lawyer Valentin Schatz, we dealt with the definition of piracy. In the second part of the interview, Newsbook.com.mt asked about case law which could be comparable to the case of El Hiblu 1 in other jurisdictions. After having established that the act was not one of piracy, Schatz delved into case law.

READ: El Hiblu: Piracy as defined by the international law of the sea – An interview with Valentin Schatz (Part 1)

Schatz referred to the case of the Achille Lauro, an Italian flagged-ship which was hijacked by four men representing the Palestinian Liberation Front off the coast of Egypt, as the ship was sailing from Alexandria to Ashdod.

Schatz said that one could argue that the four men were either freedom fighters or terrorists, depending on who you are asking. The men seized the ship and demanded the release of 50 Palestinian political prisoners held in Israeli jails. Schatz said that following the ordeal, most states and academics did not view the case as an act of piracy as the vessel was hijacked by passengers rather than from another vessel. In addition, there was arguably the absence of the private ends criterion, and the men were politically motivated.

Referring to case law in Germany, Schatz that there were some cases in which people tried to leave their countries and migrate to other territories, however the situation was not quite comparable to the case of El Hiblu 1. He cited people leaving the German Democratic Republic during the Cold War as an example, saying that the courts had found that while it was a legitimate goal to leave, this did not justify the use of force. However Schatz underlined that in these situations, the people could not prove to be subjected to similarly severe human rights violations, including torture and rape, as at least some migrants endure in Libya.

Schatz also spoke of cases where Somali pirates were tried in German courts, after the German navy forces intervened when the incident fulfilled the requirements in the international of the sea and was deemed as an act of piracy. He explained that some of those tried unsuccessfully cited that Somalia was not a stable country, arguing that they were constrained to do what they did in order to leave Somalia as part of their defence. However again, Schatz said that this probably would not be comparable to El Hiblu 1 case, given that the rescuees were not Libyan nationals, and were they to be taken back to Libya, then they could potentially be subject to very severe human rights violations. This would not be the case if it were a Somali pirate returning to their village, Schatz explained.

Schatz concluded by saying that there probably exist cases that are comparable to El Hiblu 1 and these would probably in front of national courts and that it would require a thorough research to find comparable cases.

Watch: 2 groups of asylum seekers leave for a better life in France and Portugal