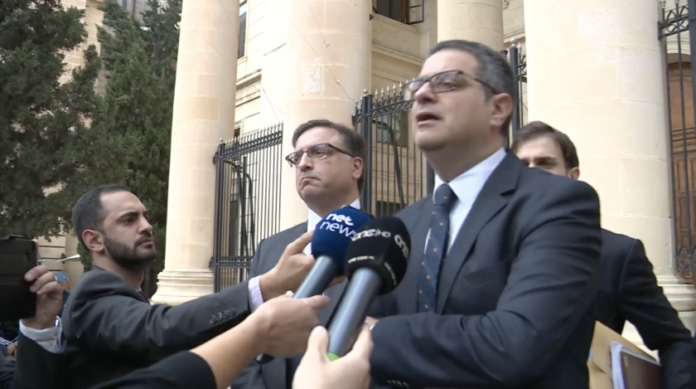 PN leader, Adrian Delia has said that Kurt Farrugia’s access to the full Egrant Report means he has has the ability to use the information inside it, as a political benefit to the Government.

Delia had filed proceedings against the Attorney General’s decision which denied the PN party access to the full version of the inquiry.

Up until now, the public, including the Opposition, have only had access to the conclusions of the report.

Speaking outside court, he said it was ‘surreal’, the, ‘growing political imbalance in this country with every passing day’.

The case is being heard in front of Judge Robert Mangion.

Egrant Inquiry: Kurt Farrugia confirmed that he has a copy of the report

The Head of Communications at the Office of the Prime Minister Kurt Farrugia confirmed that he holds a copy of the Egrant inquiry report on Monday.

Farrugia said this whilst testifying in front of the Court in the constitutional case opened by Partit Nazzjonalista and Opposition leader Adrian Delia. He also said that he received the copy on the same day when the Prime Minister Joseph Muscat called a press conference on the issue. He said that the conclusions were so striking that there was no need to consult with other parties whilst preparing Muscat’s speech.

In the previous hearing, Prime Minister Joseph Muscat had attested that the report is being edited before being put out for publication. He also said that he had consulted with Kurt Farrugia on details relating to the press conference.

The case has been adjourned for the 10th of December.

John Paul Cordina   August 2, 2020
A man has died after finding himself in difficulty in the seas around Comino on Sunday afternoon, the police confirmed to Newsbook.com.mt