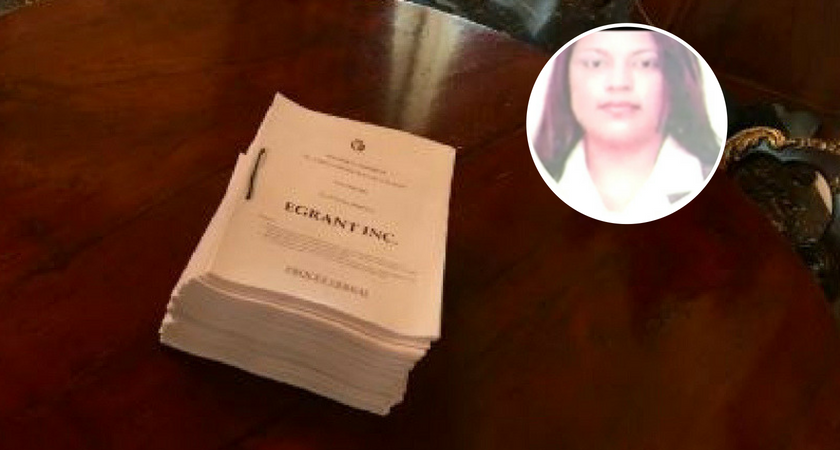 Jacqueline Alexander, an employee of the notorious law firm Mossack Fonseca, and responsible for some 17,500 companies is now also part of Malta’s legal history after Magistrate Aaron Bugeja included her name in his inquiry about Egrant Inc.

According to the published main conclusions which form 3% of the report, the magistrate did not find any evidence connecting the Prime Minister or any member of his family with Egrant.

The signature on this declaration was analysed by Elisabeth Briggs from the Key Forensic Services in Coventry who concluded that it did not match Alexander’s original signature. This led the Magistrate to conclude that the documents were “forged” and created by someone who at present was still unknown.

Who is Jacqueline Alexander?

Alexander has a chequered history of fraud and shady dealings:
• In June 2017 the Special Court in Panama denied her bail in a case concerning money laundering.
• On the 11th September 2015 she signed power of attorney documents for Henry Maksoud, a Brazilian businessman who had been dead for over a year.
• On the 25th January 2017 she was mentioned by the Toronto Star as part of an operation by Mossack Fonseca to help an Australian businessman to launder money. Mossack Fonseca incorporated a company in Chile, Servicios Andinos de Consultoria SPA which drew up a contract and invoice for $700,000. A website was designed for the company by Mossack Fonseca and a fake email chain was constructed in order to make it appear as though it was legitimate business. A second invoice of $670,000 made it appear tha Servicios Andinos de Consultoria SPA paid the company in Canada. While the paper trail show that the money arrived in Canada, the bank records tell us otherwise.

What about Mossack Fonseca?

In the Panama Papers released by the International Consortium of Investigative Journalists (ICIJ), Mossack Fonseca emerged as a shady company sought out by those who required to hide their income from authorities, from Russian oligarchs, politicians from all over the world and celebrities, one of the reasons being that Panama is a very secretive jurisdiction and would not collaborate with other authorities to provide them with information.

An investigation by French journalists showed that Mossack Fonseca used to hire people to sign copies of documents using the names of other employees who were nominally responsible for thousands of companies that they could not really handle. It was impossible, for example, for Alexander to physically deal with the seventeen thousand offshore companies that she was involved in.

Mossack Fonseca’s modus operandi was well-documented and it was proven that blank documents and undated were given to clients in order for them to sign later. Neil Chenoweth from the Australian Financial Review had tweeted that Alexander had $60 million in undocumented assets.

Mossack Fonseca’s Jacqueline Alexander had much bigger holes in the paperwork than just Egrant; one case alone had $60m in undocumented assets. But sure, trust her, no worries. https://t.co/oUxaRvrQhE