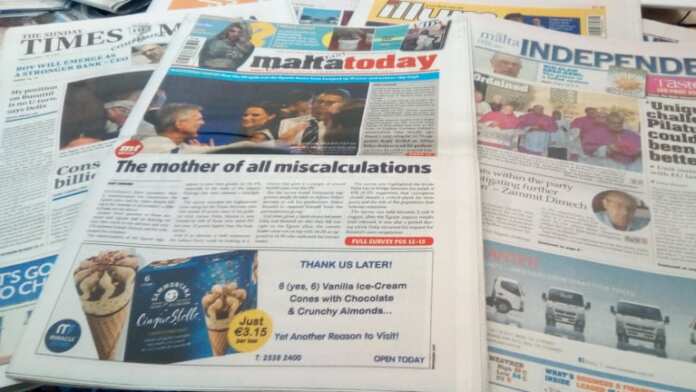 The Egrant saga and the fallout from Magistrate Aaron Bugeja’s Magisterial inquiry on the Nationalist Party continue to dominate Sunday’s papers.

Delia in the spotlight

In an interview with Adrian Delia, Sunday Times says that the Nationalist Leader minimised criticism after his decision not to pursue further action on former leader Simon Busuttil. Busuttil defied Delia’s request to suspend himself from the Nationalist Party’s Parliamentary Group.  Delia said he did this for the greater good of the Nationalist Party.

The Malta Independent on Sunday reported that Francis Zammit Dimech, one of the mediators between Delia and Busuttil, said that there were some in the party who wanted to escalate tensions. He said that the most difficult part was to convince them that the well-being of the Party is paramount.

Maltatoday described the Egrant saga as the mother of all bad calculations and the outcome of the inquiry left the Nationalist Party trailing by 100,000 votes.

Illum questioned Adrian Delia’s leadership traits after his decision to reverse his decision on Simon Busuttil’s future within the Nationalist Parliamentary Group. Kullħadd stated that many political analysts agree that Adrian Delia’s u-turn continued to weaken his position as the Opposition Leader.

On the other hand, the former Mr Justice Philip Sciberras told it-Torċa that there was what he described as ‘a particular clique’ who could not topple current Prime Minister Joseph Muscat. He said that their efforts included, according to him, fabricating a story and disguising it as truth.