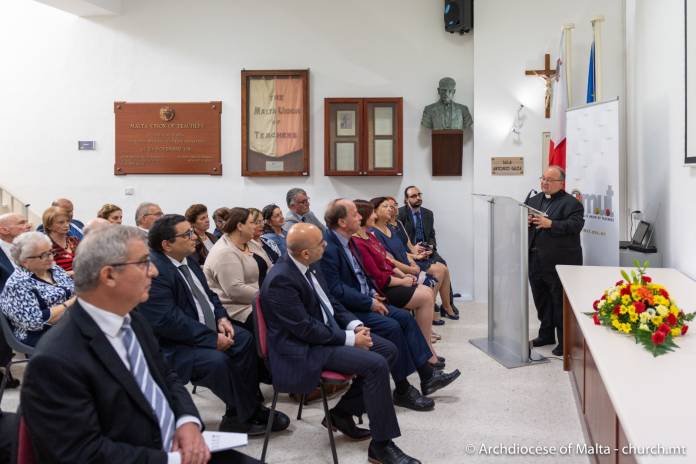 ‘Educators should ensure good comes out of their teachings,’ Archbishop Charles Scicluna stated, during his speech at the newly refurbished offices of the Malta Union of Teachers, on Wednesday.

In his speech, Archbishop Scicluna quoted the words of St Ġorġ Preca who had devoted himself to teaching youth.

The Malta Union of Teachers opened its doors to the newly refurbished office building in Ħamrun, on on the occasion of the 100th anniversary of the union’s existence.

Archbishop Scicluna remarked that the school is the place where children get to socialise, since families are smaller in size. Children learn how to live with one another school, face challenges and maybe experience love, Mgr Scicluna added. It is for such reasons that educators invest a lot of time and energy, which help in the formation of our children.

He thanked MUT for its contribution to Malta’s history of democracy, noting that the union was formed when educators were not represented in the national assembly.

Speaking about having the offices in Ħamrun, Archbishop Scicluna remarked that it has a profound meaning. He explained that the offices were moved from a commercial centre to a town which is welcoming people coming from different backgrounds who embrace different religions. This is also seen from the various restaurants which cater for different cuisines in Ħamrun, and are a testimony of the people living within the community who hail from different countries and cultures.

A good space for a better service

MUT president Marco Bonnici said that the newly inaugurated space ensures that the union’s members receive a better service. He thanked the officials, the Local Council members, delegates and those who were present when the union was founded.