Yesterday, Education Minister Owen Bonnici stressed that teachers should show courage and return to classes when asked about the concern of teachers and parents about the opening of schools.

The Malta Union of Teachers (MUT), said that Minister Bonnici should exit his bubble to understand the extraordinary circumstances that the pandemic has left on schools.

The MUT deplored the Minister’s comments while saying that he should study the risks that educators, students and families are facing when opening schools in circumstances where they are going through a severe pandemic wave.

The union stressed that the Ministry cannot simply point the finger at educators, when it was they themselves who, without direction and preparation from the same Ministry, drastically adjusted the way they worked. While they are ready to continue to change what they do in these extraordinary circumstances, the union added, but not in a context where the pandemic is not being suppressed.

The MUT had proposed the following:
MUT requests postponement of physical reopening of schools 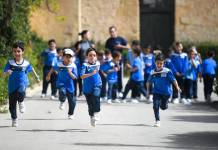 The Nationalist Party said Minister Bonnici’s choice of words only harmed the profession. PN Education spokesperson Clyde Puli said the Minister’s words neither solved his lack of preparation to open schools nor did he increase the respect teachers deserve.

The party said that the education situation in Malta is in a bad state simply because the Ministry of Education started preparing too late. Puli claimed that the Minister’s words, propaganda videos and air bubbles do not offer reassurance.

The statement concluded by stating that “the Minister’s unpreparedness and false optimism could be a danger to educators and students”.

Opposition chooses to be partisan – PL

In its reaction, the Labour Party insisted that on such a crucial decision as the opening of schools, which will affect not only the present but the future of students, the Opposition chose to speak in a partisan way without stating its position.

It added that a lot of work has been done in recent months with the World Health Organization, public health authorities and key stakeholders to draw up guidelines to minimize the risk of COVID-19 spreading in schools as much as possible.

“Our educators have been asked to change long-standing systems in order for schools to adjust to the limitations imposed in light of measures aimed at minimizing the risk of COVID-19 spread.” The Ministry of Education thanked educators for the work they have done and noted that it will continue to hold meetings with their representatives.