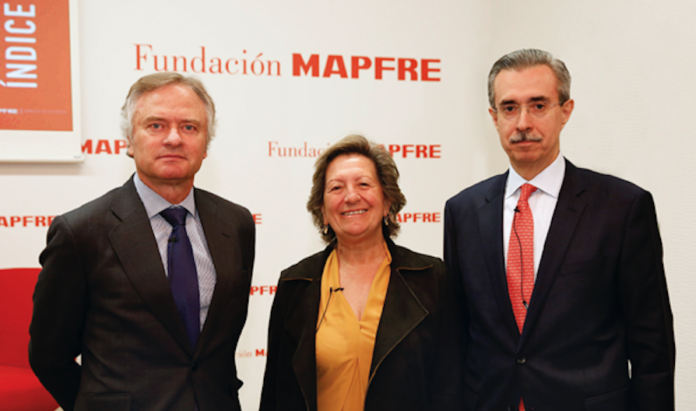 This morning MAPFRE Economic Research presented the MAPFRE GIP (Global Insurance Potential index), a new indicator designed to measure the global insurable space, through the creation of a metric which, for the first time at global level, summarises the markets that present the highest insurance potential in the medium and long term.

The MAPFRE GIP index was presented at an event attended by the Vice Chairman of MAPFRE, Ignacio Baeza, the General Manager of Economic Research, Manuel Aguilera, and the President of Unespa, Pilar González de Frutos.

“The lack of extension of insurance mechanisms in society is a factor that can contribute to lower levels of economic efficiency, and lower relative levels of social well-being”, explained Baeza. It is precisely in response to this need that the report prepared by MAPFRE Economic Research and published by Fundación MAPFRE has been prepared. González de Frutos in turn outlined the relevance of the Study, explaining that, “by definition, an economy and a society that are insured are more efficiently protected against risks than those that are not.”

The composition of this indicator is based on estimates of the size of the Insurance Protection Gap (IPG) in different insurance markets. The IPG represents the difference between the insurance coverage that is economically necessary and beneficial to society and the amount of coverage which is actually acquired. The IPG is not a static concept, but changes according to the growth of a country’s economy and population, and the emergence of new risks.

The MAPFRE GIP index is composed of 7 variables which determine the conditions for convergence or closure of the insurance gap:

Based on these elements, the MAPFRE GIP ranking has been presented on the basis of the latest available data, corresponding to 2017 (the publication of the 2018 ranking is planned in the coming months). These are the countries which occupy the top positions in the Life sector:

And this is the ranking corresponding to Non-Life:

The insurance potential index involves the analysis of 96 insurance markets (both developed and emerging). It involves practically all insurance premiums issued globally, and will be updated and issued on an annual basis by MAPFRE Economic Research.

You can read the short version of the report here.